Another sign of spring: the annual Dance Parade is May 20 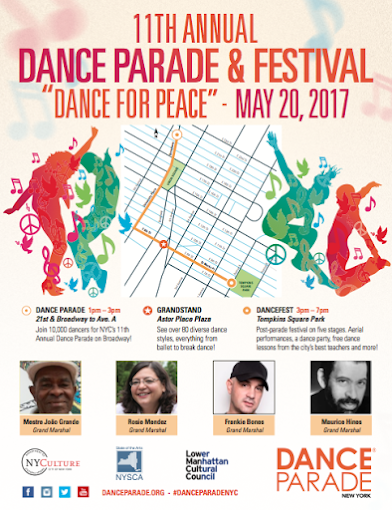 Organizers of the 2017 Dance Parade have released more details about this year's event... via the EVG inbox...

Dance Parade New York is pleased to announce details for its 11th-annual event, showcasing over 150 dance groups across 83 unique styles of dance in celebration of peace and unity.

Grand Marshals for this year’s Dance Parade are capoeira master, Mestre João Grande; Broadway legend, Maurice Hines; American pioneer of techno music and founder of the Peace, Love, Unity and Respect movement, Frankie Bones; and the honorable Council Member, Rosie Mendez, who has been a committed supporter of Dance Parade since inception. The Grand Marshals will kick off the parade and festival with a ribbon cutting ceremony that begins at 12:45 p.m. on Saturday, May 20.

At 1pm on May 20th the parade unfolds with 10,000 dancers who salsa, sashay, 2-step and boogie their way down Broadway from West 21st Street, through Union Square and University Place and across 8th Street/Saint Mark's Place to a grandstand in Astor Place Plaza where performances take place.

Ending in Tompkins Square Park, DanceFest comes alive from 3 to 7 p.m. highlighting the artistic excellence and cultural treasures found in the Dance Parade. Festivalgoers are invited to view the richness of its cultural forms on four stages, participate in social dancing and take dance lessons — all FREE to the public.

This year's parade theme is "Dance for Peace."
Posted by Grieve at 4:30 AM

Since I see a number of municipal sponsors on the supporters page, that means your dance parade is not FREE to the public.

Don't knock the Dance Parade! This is probably the most positive and inspirational events of the year. Everyone is welcome and it's nothing but fun. I wish there were more events like this - the world would be a better place.

Agreed! I look forward to it every year- so much fun from the toddler tap dancers to the granny belly dancers! Everyone contributes and is a part of NYC!!

11:30 AM
How can this type of event exist except for municipal arts funding? Would you prefer corporate funding? This is what our municipal arts groups should be doing: supporting the arts, including Dance - and introducing cultural heritages to our youngsters.

Agreed! I look forward to it every year- so much fun from the toddler tap dancers to the granny belly dancers! Everyone contributes and is a part of NYC!!

dance parade is always fun ! so colorful and happy ! i go every year !

Cannot wait! And yes it's free and open to all. I danced for four hours last year and took two classes. Ended on Thriller as usual. Many people had skates on and the dance offs between the 8 years olds is the best. They are so damn good.