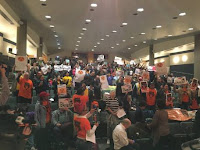 Last week, reps for the Rent Stabilization Association proposed increases of up to 8 percent for the city’s rent-stabilized apartments during a public hearing. (The calls were for a rent hike of 4 percent for new one-year leases and 8 percent for two years, per the Post.)

The Rent Guidelines Board (RGB) froze rents for one-year leases the past two years.

Tonight, the RGB will take a preliminary vote on the new rates in the Great Hall at Cooper Union at 7. There will be five public hearings before the final vote on June 27.

The Rent Justice Coalition is bringing Tenants from across the City together to make our voices heard! RENTS ARE STILL TOO HIGH and RGB must change that!!! RGB will VOTE on Preliminary Rent Adjustments for 2017-19.
Rally at 6pm
Doors open at 6:30pm

The RGB does not set the rent increase for vacancy leases, rent-controlled apartments, unregulated apartments or subsidized housing.

Email ThisBlogThis!Share to TwitterShare to FacebookShare to Pinterest
Labels: Rent Guidelines Board

The RJC wants an 8% rollback (lowering) of rents. The landlords would freak if there was a rollback.

Are they joking? It was frozen to give people a modest slow-down in their rates. This will jack them right back up. NO!!

It was a rent FREEZE.
That means we should resume where it fkn LEFT OFF.

Tenants need to turn out for these rallies. They need to speak out. There is no reason why we should keep paying more and more and more for buildings that are falling apart! My Civil War era building has some seriously antique wiring, crumbling walls, mold, mice, and broken fixtures. Will there be repairs? No, not unless they are court ordered and then often done slipshod.

There needs to be a ceiling on the rents charged on such broken-down tenements! And landlords should be on notice: ALL THE HIDDEN INCOME YOU RECEIVE OFF THE BOOKS THAT YOU NEVER OPEN TO SHOW ALL YOUR "HARDSHIPS" INCLUDE INCOME YOU MAKE FROM ADVERTISING BILLBOARDS ON THE SIDES OF BUILDINGS, CELL PHONE TOWERS ON ROOFTOPS, RENTING OUT BASEMENTS ILLEGALLY, AND IN SOME CASES EVEN GETTING KICKBACKS FROM THINGS LIKE FOOD TRUCKS THAT USE WATER AND OTHER FACILITIES THAT YOU ARE ILLEGALLY PROVIDING. And what about landlords who use services like Air B&B? There are just as many if not more who do.

All tenants should seek their rent histories as well. I recently discovered that I am paying more than $500 a month above what I should be paying because the rent on my building was illegally raised twice in the 1980s for high-end renovations that NEVER happened. They put a shit wall in a studio and called it a one bedroom. Now, the RENT IS TOO DAMN HIGH. IT WAS TOO HIGH THEN, IT IS TOO HIGH NOW, and THERE IS NOT A GOD-DAMNED THING I CAN DO. LL's are the cruelest most ruthless CAPITALISTS on this planet. SPEAK OUT, ORGANIZE, AND FIGHT TO THE DEATH. HOUSING, LIKE HEALTH CARE, IS A HUMAN RIGHT!

@Anon8:47 Housing may be a human right, but I don't think that extends to living in the most sought after real estate in the USA. Manhattan is a small island where demand greatly exceeds supply - what do you expect to happen?

This comes right after De Faustio, who appointed every flunky/one on the board, was exposed for jacking up rents in his park slope houses and how he pays less tax than single home owners in East New York and Bayside.

I am not condoning or endorsing the raising of rents, but there are good landlords out there struggling amongst the lowlife scumlords cutting corners like 8:47 emphasized above.

If only salaries increased at the rates of rent. I'd love an 8% raise...or even 4%. This is death by a thousand cuts for the lower/middle class.

A 1% on a one year lease and 3% on two year lease is reasonable and fair.Given the number of apartments that crossover to market each year the number of new buildings built with luxury rent prices its hard for empathy to develop for Mr. Potters. Yes Manhattan is a small island but it is not the Palace Grounds for the rich and the Uber rich at the expense of everyone else...