Checking in on John's of 12th Street 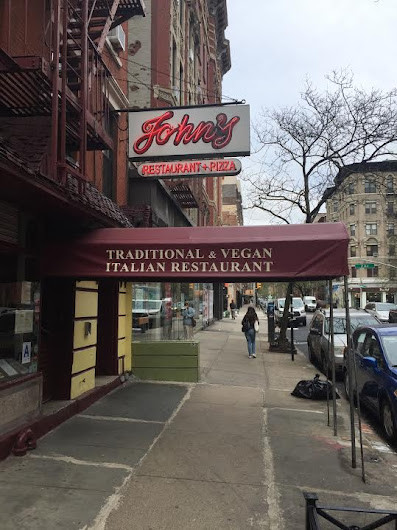 The recent news of Angelica Kitchen's closing prompted us to check in on the former vegan restaurant's longtime neighbor — John's of 12th Street, the venerable Italian restaurant that opened here between First Avenue and Second Avenue in 1908 ... 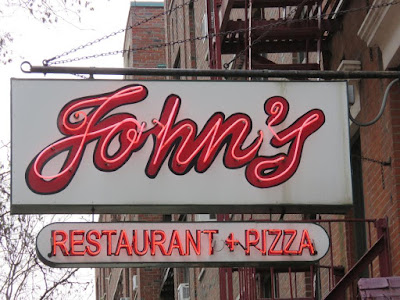 Judy Anderson, whose late husband, Mike Alpert became a co-owner of John's in 1973 along with Nick Sitnycky, said that there was a little confusion among a few patrons who thought that John's had also shut down.

"Nick tells me that ... three separate people have stopped by the restaurant a bit confused because they heard that John’s is closed. We are not closed!" Anderson said. "I’m guessing that the neighborhood talk about the closing of Angelica Kitchen, next door to us, somehow has morphed into discussion of John’s. Plus we were suffering in Verizon hell with no main phone line service the first week in April."

The phones have been back in service. As for their former neighbor: "We are sorry to see Leslie and Angelica Kitchen go. Nick and my husband knew Leslie when Angelica’s was on St. Mark's Place. Good neighbor and we wish her well."

Meanwhile, as we first reported last August, Paul Dauber, the restaurant's accountant as well as a longtime friend and patron, was purchasing John's along with a childhood pal from their days of growing up on the Lower East Side.

"The sale of the restaurant is on track though still no date set yet," Anderson said. "We’ll still be available afterwards to make sure that the transition is seamless. There are no planned changes in personnel, menu or decor. Meanwhile, we are open for business as usual."

Previously on EV Grieve:
Out and About in the East Village with Nick Sitnycky Part 1 and Part 2

Q-and-A with Vanessa McDonnell, director of the John's of 12th Street documentary
Posted by Grieve at 4:30 AM

I love John's waiters, prices, menu, vibe, aesthetics. But you really need to add a lot of red pepper and parmesean to their marinara. But that is perhaps the way it is supposed to be, classic and original gravy.

Now is the time that putting the word Vegan on their awning is going to pay off. The poor lost souls who don't yet know that Angelica's has closed will be able to go into John's for refuge.