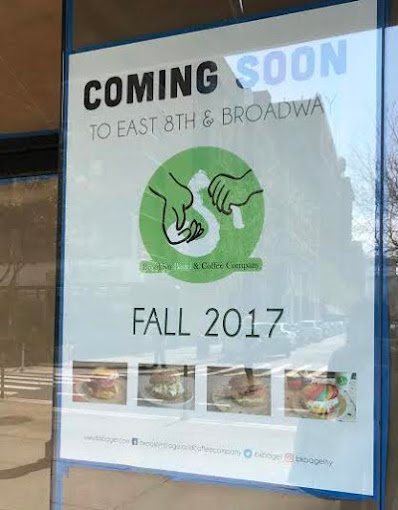 And over on Eighth Street just west of Broadway... there's signage announcing the new tenant — an outpost of Brooklyn Bagel & Coffee Company... coming this fall.

Despite the name, the 15-year-old company has three locations in Astoria, one in Chelsea and none in Brooklyn. You can find their menu, which includes a variety of sandwiches, soups and salads, here.

Thanks to EVG reader Brigitte for the photo and tip!
Posted by Grieve at 4:01 AM

Just what we need…another bagel store!

Makes me wonder: what ever happened to Bagel Nosh?

Oh God, go away. Enough with the coffee and bagels.

The only point of white chocolate is grease. Why put it in cream cheese?

Can't wait until it comes. Since it appears that only a small number of EVG posters and readers ever get west of Astor Place, it is possible that this place will comfortably fit into the NYU world and that of Gold Coast Greenwich Village apartment buildings. Welcome!! Welcome!!

I guess the name "Bagel Queens" didn't have the right ring to it.

Bagels and coffee in New York City, the horror! At this point, I have no idea what kind of businesses are acceptable in the east village. Seems like cobblers and locksmiths are the only acceptable retail stores. While there are now a few bagel places in the area, there is no bagel oversaturation, so I don't understand the opposition.

Indeed, by the time he was indicted in the credit-line scheme, Abramo already had a lengthy, ostensibly legitimate track record. In the late 1980s Abramo founded publicly-held investment companies with names such as Cambridge Investment Service Corp. and American Acquisition Corp. (SEC filings by these companies show they did little but file papers with the SEC.) According to papers filed by Abramo with the SEC for the investment companies, Abramo was a "restaurant consultant to Northern Roses Inc. (Miami, Fla.)," during 1982, and "was also a restaurant consultant to Bagel Nosh Inc. (1983 and 1984--New York, N.Y.)." Abramo's Bagel Nosh connection is significant, because the company was brought public by Thomas J. Quinn.

Quinn was one of the most prominent figures in the penny-stock world, but his association with Abramo has never been made public, although regulators have long suspected it. When Quinn was jailed in France in 1988 for securities fraud, investigators say, Abramo's name was prominently displayed in a notebook that was seized from him. Calls in 1995 from Quinn's telephone to Abramo's unlisted home phone number also appeared in phone records that were recently subpoenaed by investigators seeking Quinn's assets. (He was successfully sued by the SEC for securities fraud in 1989 and owes millions of dollars in civil penalties.) Indeed, Abramo was subpoenaed to testify before the SEC in 1989 during a probe of Quinn, but he invoked his Fifth Amendment privilege against self-incrimination. Efforts to reach Quinn for comment were unsuccessful.

Can't figure out what afbp @3:32 is responding too. Where is the information being referenced posted. If this is about Bagel Nosh, what does it have to do with what's coming to 8th Street. Clearly afbp knows something, but the connection is lost.

No, not horror, wiseass, just boredom.