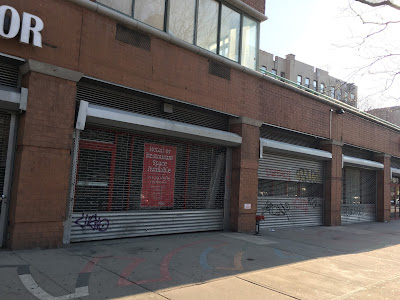 Retail for rent signs have arrived along 250 E. Houston St. ... where there have been several vacant storefronts in the former Red Square residential building between Avenue A and Avenue B... 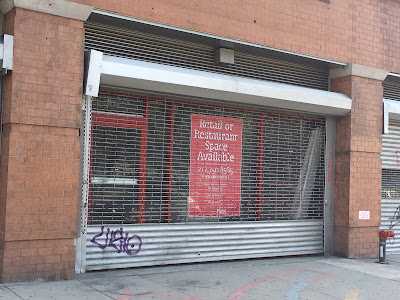 The 13-floor complex changed hands for a reported $100 million last fall. However, according to the Post, the retail space was not part of the deal.

Well, someone is renting it now. The listing at Ripco notes that 4,000 square feet of divisible space is available... this... 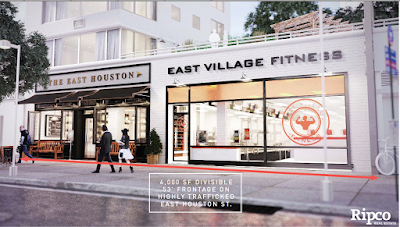 Anyway! Per the listing, all uses are considered ... and "sidewalk cafe possible due to building setback."

"The Dermot Company is renovating this 130 rental unit building. The facade and storefronts will be refaced creating a more updated style and fit for the cool East Village neighborhood. There is 4,000 SF available immediately; subdivisions are considered. The space is perfect for restaurants, cafes, fitness, lifestyle retailers, and all other high quality uses." 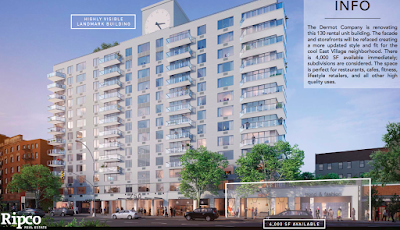 There's no mention of the asking rent.

The building opened for occupancy at the former site of a gas station in June 1989. Workers removed the building's statue of Lenin from the roof last September.

Blockbuster closes tomorrow; last chance to buy the store's fire extinguisher
Posted by Grieve at 4:22 AM

Painted white makes this one look like it belongs in Miami. I noticed passing some larger apartment buildings uptown that the lobbies are getting renovated to look like a Verner Panton lounge, bright white, some "design" pieces all in an attempt to get a younger generation to live there. Some nice period lobbies are being lost.

White is the color of iProducts, so therefore instantly desirable. Perfect for lifestyle retailers and al fresco dining on the glamorous shores of E Houston.

These people should not cite fitting into a neighborhood if they want to waste money making the building look like it's in South Beach. Gross.