Yuan Noodle in the works for the former Biang! space on 2nd Avenue 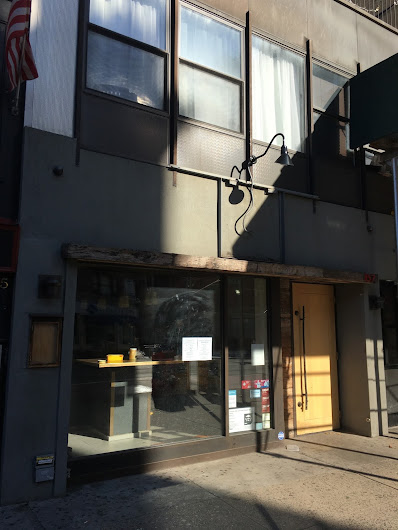 CB3 hasn't yet posted the schedule for May meetings just yet... until then, we at least know about one applicant that will appear on the SLA committee docket... an EVG reader shared this photo from 157 Second Ave. ... showing a flyer for a new restaurant called Yuan Noodle... 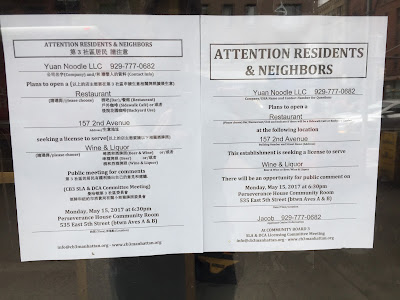 No word just yet who's behind this venture. Biang! — the sit-down Chinese restaurant via Xi'an Famous Foods owner Jason Wang — closed here between Ninth Street and 10th Street back in March after 15 months in business.

The previous tenant at 157 Second Ave., Wylie Dufresne's bistro Alder, closed after two-and-a-half years at the end of August 2015.

If Wang and Dufresne, given their successes, couldn't make the space work ... not sure who can. Other recent restaurants here (before 2013) included Plum and Cafe Brama.

CB3's SLA committee meeting will be on May 15. We'll update when more information becomes available.

I moved to this block in 1987 and that spot has seen soooooo many restaurants. Nothing lasts long. Seems like its cursed.

SOMEONE can make it work if they trim the rent a few thousand dollars. For every 1K/month in rent, a restaurant needs receipts of about 10K/month to survive (from what I've read). A 3K reduction in rent would mean 2000 fewer orders of noodles per month (assuming $15/order). That's a lot of noodles.