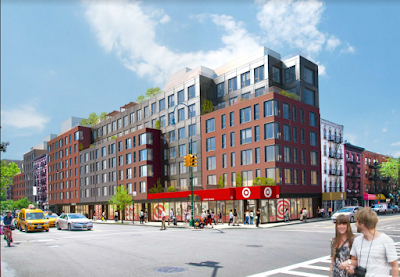 As you may recall, Target is leasing 27,306 square feet in Extell's new development at 14th Street and Avenue A for a small-format store expected to open in the summer of 2018.

That store will have some competition with itself. The Wall Street Journal is reporting that Target will also lease space in the second floor of the tower under construction at 145 Clinton St. in the Essex Crossing complex. This space will also house a Trader Joe’s.

Some details via the Journal:

Essex Crossing, which extends roughly between Stanton and Grand streets to the north and south and Essex and Clinton streets to the west and east, will have 1,061 rental and condominium apartments and include a movie theater, a bowling alley, a three-block-long marketplace and a medical facility.

A majority of the retailers that have signed for space at Essex Crossing are expected to open in 2018, offering services in an area that has been underserved, said Andrew Katz, a principal of Prusik.

Target “sees tremendous potential” in New York City, where there is a dense population and plenty of tourists, making the area one of the company’s priority markets, the spokeswoman said.

Target is using the stores to support its online shoppers, offering them the ability to order online and pick up purchases in the store within an hour. The company plans in June to test same-day delivery service from its Tribeca location, offering store shoppers the option of having their purchases delivered within a certain time frame to locations in Manhattan and parts of Brooklyn and Queens, for a fee.

The disappearing storefronts of East 14th Street
Posted by Grieve at 9:03 AM

Why would tourists go to Target?

Why would tourists go to Target?

Because it reminds them of home.

Tourist go anywhere so long it's in Gotham.