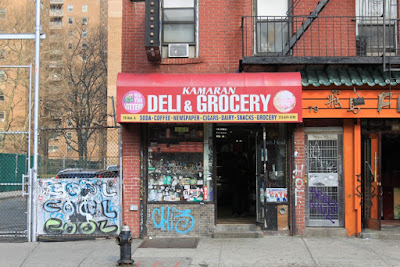 Updated 6/3: Authorities have now said that the victim made up claims of the assault. Police arrested the 18 year old, Noel Torres, who was charged with filing a false report. The charges against the clerk were to be dismissed, according to the Daily News.

A clerk at Kamaran Deli and Grocery on Avenue A at Fifth Street was arrested for assault after reportedly hitting a customer with a baseball bat and calling her a tranny.

According to the Daily News:

Dia El-Deen Hassan went berzerk when the 18-year-old victim walked into the [deli] ... about 7:50 p.m. Tuesday and tried to buy beer and other items, police and sources said.

The freewheeling East Village is known for tolerance — but not on this day.

Hassan, 20, pushed a plastic display case and grabbed the victim’s arm before picking up the bat and hitting her with it all over her head and body, sources said.

“I’m not serving a tranny!” Hassan shouted, according to cops.

The victim, 18, was treated at the scene and declined to go to a hospital.

The Daily News updated the article.

A lawyer for the clerk claims the victim, 18-year-old Noel Torres, "is lying and says he has video to prove it."

“Video shows the complainant trying to steal and run out,” lawyer Stuart Meltzer said Wednesday. “It’s not a hate crime. It’s a theft that was trying to be prevented.”

After his arraignment in Manhattan Criminal Court yesterday, Hassan was released on his own recognizance, the Daily News reported.
Posted by Grieve at 6:38 PM

That store has never been "known for tolerance"; more known for selling crack pipes to addicts and dispensing attitude and overpriced alcohol to clueless visitors to the 'hood.

I haven't been there in maybe four years, so I don't know the young man who is accused of this crime, but over the many years that I went in there the guys were always cool with me. I find this very strange and hard to believe.

This bodega has been the worst for quite some time. Never going back in.

I don't guess he'll be serving anyone for a while. Hopefully he rots in Rikers.

I lived briefly in that building when it was just called Steve's Deli/Grocery (the sign's still there.)

Funnily enough, there were two transsexuals/transvestites in the neighboring apartment, both named Joey—or so I was told. I was there only about two months, in the fall of 1981. The building was a bilious green color at the time, and still had a cornice.

I walk by that building all the time, but I won't bother going in the store ever again.

Actually Hassan is not in jail, might have been questioned, but not held.

According to the other clerk Hassan was dealing with a drunk and belligerent person trying to shoplift beer. He swore at him in Arabic, and threw a pie at him. The shoplifter is trying to turn this into a 'hate crime' instead of a 'shoplifting crime'.

They have always been complete assholes. Well, one guy was nice...but that's about it. Always assumed they had some scam going on in there selling stuff not on the up and up.

It'll be interesting to learn what's on camera.

I was all ready to go protest this place, but reading your update made me think there is another side to this story. I want to see the video before I pass judgment on this man. I have a lot of empathy for bodega employees after doing grand jury duty a few years back. They have to deal with a lot of shit.

Getting as complete of a picture as possible about what happened is pretty important before coming to a very quick conclusion; maybe it happened the way the initial story reports or maybe not. To be continued...

He has been charged with assualt in the 2nd Degree, punishable by up to seven years in jail. He better have a good video tape to back up his story..

PL 265.01 02 A Misdemeanor, 1 count, Not an arrest charge, Arraignment charge
Description: Crim Poss Weap-4th:int To Use

Not as common as Assault in the Third Degree (New York Penal Law 120.00), Assault in the Second Degree (New York Penal Law 120.05), is a significantly more serious felony crime punishable by up to seven years in state prison. Like the lower level of Assault, Second Degree Assault has many nuances, distinct subsections and a significant amount of legal decisions that impact how your New York criminal lawyer will not only analyze the case against you, but implement a viable defense. The following are some of the main or most commonly prosecuted sections of Assault in the Second Degree throughout New York City (Manhattan, Brooklyn, Queens and the Bronx) and Westchester County.

ASSAULT IN THE SECOND DEGREE: NY PL 120.05(1)
You are guilty of Assault in the Second Degree if you have the intent to cause serious physical injury to someone and actually cause serious physical to that person or another person. It is imperative to note that “serious physical injury” is a term defined in the New York Penal Law. It is likely that a laceration to a cheek, swollen eye or even a fracture to the nose is not a sufficient injury. This type of injury would likely be sufficient to only satisfy the elements of Assault in the Third Degree.

The clerk did nothing but defend his business. He's usually nice even when I come in there being a smart ass. Grocers and clerks at markets do put up with a lot of shit.