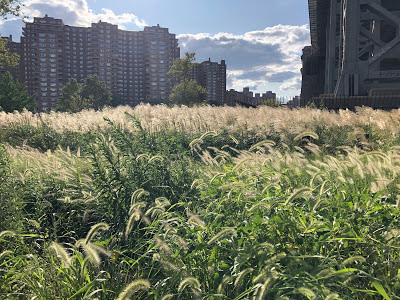 As you know, the entire Park was set to be shuttered for three-plus years starting in March. Now, early East Side Coastal Resiliency Project (ESCR) work will commence in the spring, with all of East River Park remaining open until next fall. The flood protection construction will be done in phases.

“The community spoke and we listened,” said Mayor de Blasio. “Nearly half of East River Park will remain open throughout construction – without compromising essential flood protections for 110,000 New Yorkers. We are building a more resilient city to meet the challenge of global warming head-on.”

The phasing plan will allow nearly half of East River Park to stay open at all times and will still deliver flood protection by hurricane season 2023, one full hurricane season earlier than under the previous project approach.

In order to enable the new park phasing plan, the schedule for completion of the overall project will be extended to the end of 2025, without any delay in delivering critical flood protection to the 110,000 local residents vulnerable to severe climate impacts in the future. Construction is scheduled to begin in March 2020.

First Phase of Construction (Fall 2020 to Spring 2023): The vast majority of the park areas from Delancey to Houston Streets will remain open as well as the amphitheater area in the south and the portion from approximately East 10th to East 12th Street in the north.

Second Phase of Construction (Spring 2023 to Late 2025): Newly rebuilt portions of East River Park will be open from Houston Street to approximately East 10th Street, as well as the vast majority of the park areas from Corlears Hook Bridge to Delancey Street.

Details of the plan will be presented at a City Council public hearing this afternoon at 1 p.m. (Oct. 3) in what marks the final stages of the land use review process. (Want to attend? Details here.)

Advocates at the community group East River Park Action, who organized the Sept. 21 rally, were not pleased by yesterday's news. Here's part of their reaction:

This is not good. Our park will still be completely destroyed — just over a longer period of time — five years instead of the original three and a half years.

It looks like the whole promenade will be closed while the city builds an 8-10 foot solid flood wall along the river.

The city will say it’s the neighborhood’s fault the timeline is longer because we asked for phased construction. In fact, it’s because they were never going to be able to get it all done in three and a half years, and they knew it.

The project was also undergoing a third-party review by a Dutch consultant hired by Manhattan Borough President Gale Brewer and local City Councilmember Carlina Rivera. No word on this review's status.

Yesterday's changes marked the second time that a significant alteration was announced for the stormproofing project. Last fall, the city surprised community stakeholders by announcing a complete overhaul of a plan that had been discussed over four years of local meetings.
Posted by Grieve at 5:00 AM

Everyone who is able should try to attend and speak at the city council meeting about the plan today (Thursday October 3rd) at 1pm. East River Park Action has a list of things to do that can help the city get the message!
http://eastriverparkaction.org/actions-now/

With Potentially toxic landfill particles filling the air, it doesn't seem safe to live or go anywhere near any of the phased construction."

Comment from October 1, 2019 at 1:28 PM "The city does not seem concerned with toxic track turf chemicals being a health hazard. What about the landfill used to raise the park?
During construction, landfill dust, which may contain harmful chemicals i.e. asbestos..., blowing around without any mature trees cleansing the air is simply unnatural and wrong and not healthy for dogs or anyone visiting/residing on the LES/East Village area."

What a joke. Delancey to Houston and 10th-12th will be open? That's hardly any improvement. Still destroying the track needlessly right away and still not providing any link to the east river path below the park. DeBlasio is clueless and Riviera will now tout this as a win for no reason.

8:52 AM Are you kidding?
Not even a fraction as bad basic road resurfacing that takes place right in front of our windows every few years.

The partial construction plan is a joke. It will never happen. Some excuse will be found to close the entire park... and at that point nobody will care... Out of sight out of mind. They have to be stopped... NOW! They are showing cracks in their resolve. If Dr. Gerhels study at all questions the legitimacy of their plan it will die. Have faith. Show up.. and give them helllllll!

As I posted at the EV Grieve FB thread on this issue:

"Very important. Still to be heard is the Dutch consultant report.

And this from the East River Park Action group:

"It looks like the whole promenade will be closed while the city builds an 8-10 foot solid flood wall along the river."

Still a BS waste of $ plan that is not as good as other plans.

Agreed Carlina will at like there is a victory, as she does when none is at hand. She needs to fight to save the park not destroy it in phases!!!! #sad

De Blasio saying 'you spoke and we listened' Pfft! It would be funny except that it isn't.

The only way De Blasio's has good hearing is when someone puts a lot of $$$ into his pocket - then suddenly all his earwax is gone.

We can all hope that our next Mayor will have a little common sense and a smidgin of compassion.

Agreed! Riviera is just as much to blame as DeBlasio for this. When’s she up for re-election?

I hate to say it but we need Cuomo to fix this! PUT THE WALL IN THE ROAD NOT THE PARK!