A full day of activities in East River Park today 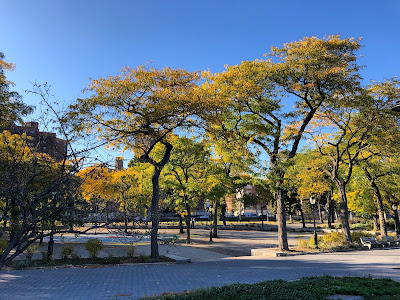 Aside from the Tompkins Square Halloween Dog Parade today (Oct. 20) ... there are many activities taking place in East River Park.

This map via East River Action has details (as does this post)... 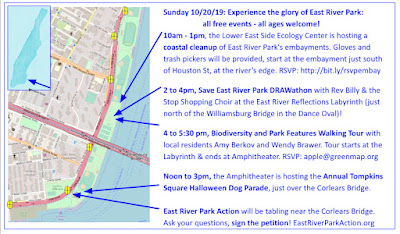 Among today's highlights: A DRAWathon from 2 to 4 with Rev. Billy and the Church of Stop Shopping...

Per the invite: "There will be supplies, and you can bring some. Draw trees and do some ACTION outreach." 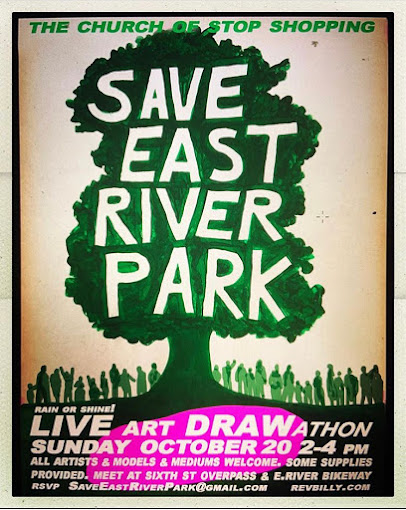 As Nathan Kensinger's must-read essay on the Park for Curbed points out...:

The environmental impact of the East Side Coastal Resiliency Project would be enormous. In the ESCR’s Final Environmental Impact Statement, which was released in September, the city estimated that their preferred plan would result in the removal of 991 trees, of which 819 are located in East River Park. Many have been growing here since the park opened in 1939, and have root systems too large and complicated to be dug up and relocated. Instead, these trees would be chopped down and replaced with a forest of new saplings planted on top of the landfill. The report estimates that this would eventually result in a gain of 745 trees, but it would take decades for the current tree canopy to fully regrow.

My little book, East River Stories, which has been out of print for many years and back then it could be found in little bookstores everywhere but now you can't even find a bookstore anywhere, has risque stories about the East River Park in the 1960-70s. Would like to walk there again, see old benches, revive old memories...Sigh, it's bound to change, maybe for the worse...