Newsstand arrives on 4th Street and the Bowery 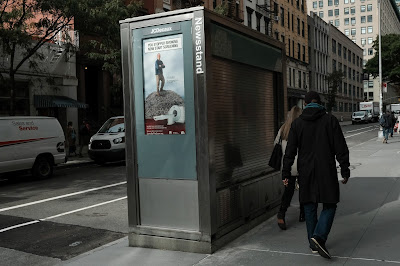 The familiar steel structure of a Cemusa newsstand complete with ads via JCDecaux arrived on Fourth Street just west of the Bowery this past Thursday.

We first heard about this proposed stand back in February 2018. 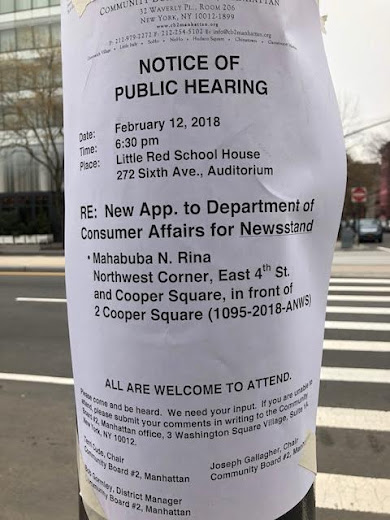 [Photo from February 2018 by Sheila Meyer]

The next closest newsstand is on the east side of the Bowery at Second Street. And then there's Jerry's Newsstand on Astor Place.

In any event, it seems like an odd place for a newsstand. (There are likely metrics showing an influential demographic using this corridor that makes it appealing to advertisers. And there is the new development likely on the way across the street.)

The New Yorker looked at the possible newsstand of the future (the New Stand on the Bowery) in a piece from June ...

Some background: newsstands — traditionally, ramshackle steel structures — have been a long-standing feature of New York’s sidewalks. (There were 1,525 newsstands at their peak, in the nineteen-fifties, selling morning and evening editions.) In 1911, when the city tried to purge them in a cleanup effort, William Merican, the president of the Newsdealers’ Association, told a reporter, “Why, there are some men who cannot eat their breakfast without a newspaper.”

He added that women buy the papers to make them “forget their misery. If the public cannot get their newspapers on the street, they will find the inconvenience intolerable.”

In 2007 — with Facebook and Google gobbling up newspapers’ ad revenue — the Bloomberg administration attempted to “rationalize” the city’s beleaguered newsstands (the mayor’s word), replacing the old, jerry-rigged stalls with slick, corporate-looking edifices from a marketing company, which uses their exteriors to sell programmatic ads. Today, the city has a little more than three hundred newsstands. They are required by law to sell printed material.

But Max Bookman, a lawyer who represents the New York City Newsstand Operators Association, told me, “I talk to newsstand operators who feel lucky if they sell fifty newspapers a day.” For the most part, they eke out a living on convenience items: snacks, bottled water, e-cigarettes, lottery tickets, and umbrellas when it’s raining.

Email ThisBlogThis!Share to TwitterShare to FacebookShare to Pinterest
Labels: newsstands