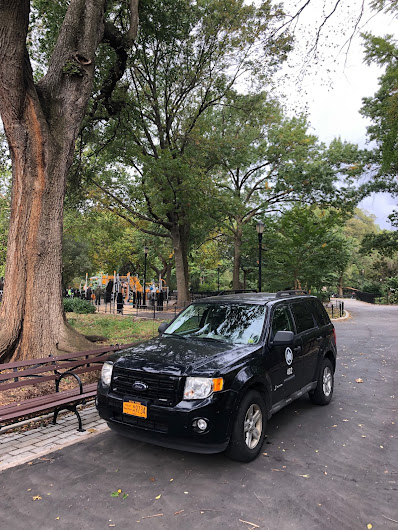 Repairs at the recently refurbished Tompkins Square Park playground at Seventh Street and Avenue B are underway this morning.

An EVG tipster spotted a Parks Department vehicle and several workers on the scene... it appeared they were focused on a broken swing seat... 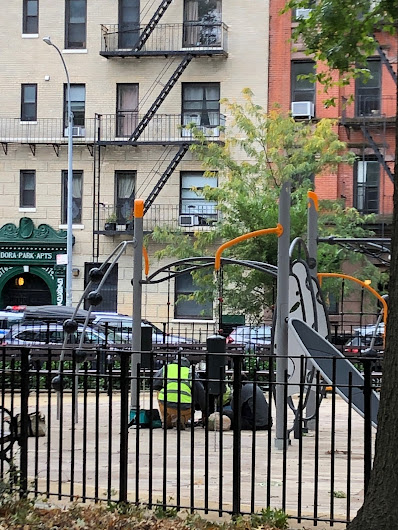 We've heard from several concerned parents in recent days about the equipment breaking down less than 10 days after the refurbished playgrounds debuted on Oct. 4.

As one parent noted: "One of the tethered swing seats has already come undone and is swinging freely and dangerously due to a bent bracket and missing locknut." On Sunday, the parent asked an NYPD officer who was in the Park for crime-scene tape to prevent anyone from using the broken swing.

The upgrades, which took 12 months to complete, included the reconstruction of two playgrounds with new safety surfacing, spray showers, seating and fencing. According to the Parks Department website, funding for the reconstruction cost $2.57 million.

And some reaction to what has transpired in the new playgrounds...

We're glad for these upgrades, but @NYCParks needs better accountability when it comes to quality control. Our office has asked for fixes, but also answers to what happened to this playground equipment. https://t.co/FtNXezv8tg

More great work from @mitchell_silver. First he got us the $3 million park bathroom. Now a $2.5 million playground upgrade that broke after two weeks of use. https://t.co/jz536SoLly

Do a search for "NYC parks without borders" and you'll find this is a city-wide problem. Parks Dept and mayor not listening to residents at all, and are just forging ahead with plans to lower fences and make unnecessary and unwanted renovations. It's all for the asthetics, which will backfire as shoddy work and vandalism will only increase.

OMG with this fence thing already! How about "Great job Grieve!" or "Glad to see this blog helping to make a difference in the neighborhood"

Love how Carlina takes a stand for swing sets, but not for the Tech Hub neighborhood protections she swore she'd fight for. Way to pick your battles, honey.

The height of the fence is a separate issue. The equipment had a few loose bolts and nuts here and there. It is a nice upgrade and from what I can see the kids are enjoying it. The surface material seems solid to absorb shock and avoid bad falls because we all kids running around excited skin their knees.

Kids are not heavy and forceful enough to break this equipment, although I was not witness to how they were destroyed it makes sense that adults probably drunk ones coming out of bars over the weekend evenings which is when this happened damaged the playground. The 4' fence gave them easy access, the 4' fence also gave iv drug users the same access the week prior and they left a bloody rag and syringes behind. Yes fences are affective in preventing this scenarios and to dismiss the fence height goes against all logic and understanding of human nature.

The lower fences are tied to the mass incarceration issue... The closing of Rikers... And turning prisons into student centers for our misunderstood criminals. Death-of-the-City de Blasio and his commissioner are removing/lowering fences because kids might feel "imprisoned". I wonder if they are going to remove window guards from city housing windows next? Hmm. Seems logical to our mayor. Maybe we'll call him Death-of-the-Child de Blasio if he continues his policy.

I'm leaning towards some junkie freaks who did this on purpose to see the children get hurt. These are the people who give LSD or razor blades to children on Halloween. They are out there. Its time to round them up and put them in a special room, give them all the dope they want and let them rot away their lives out of sight.

Y’all are pretty imaginative with these comments. I’m in that playground every day with my kid, and have been on a lot of playgrounds. I just don’t see $2.5 mil worth of quality here. Maybe if it included the land purchase, lol, but otherwise, this contract 100% went to the lowest bidder.

These guys are still on about the fences. Unbelievable. There is no evidence that anyone sneaked into the playground to break things, and the post about the mom who found the syringes and IVs actually stated very clearly that they were found "directly next" to the playground, not in it (https://evgrieve.com/2019/10/preliminary-thoughts-and-concerns-about.html). In sum, please stop it. Enjoy the park. This is EV Grieve not infowars.

“These are the people who give LSD or razor blades to children on Halloween.” Fictitious people, then. Good grief man, get a grip!

Europeans are thinner on average and this playground needs to fenced in and closed at night. This is alphabet city and bar capital of the world.

why doesn't carlina rivera concetrate on the homeless tent cities popping up and the crime they bring to the east village. it's not so much the homeless, but the people those tent cities attract - drugs and crime.