Reports: 2 women kicked out of Downtime on Avenue B for confronting accused rapist Harvey Weinstein at event for artists

I spoke to the Zoe Stuckless, who confronted Harvey Weinstein last night, called him a "fucking rapist," and was then kicked out of Actors Hours — meant to be a safe performance/networking space for young artists — by the event coordinators themselves: https://t.co/KgzhRvrsaS

In case that you didn't see this story from this yesterday — outlets from BuzzFeed to TMZ covered it.

According to various published reports, Weinstein, sitting at a reserved table with an entourage, was mostly welcomed in the space.

The women — comedians Kelly Bachman and Amber Rollo, and actress Zoe Stuckless — say they were attending a showcase ... when they spotted the disgraced producer in the crowd. Weinstein, who has been accused by over 80 women of sexual misconduct, is currently out on $1 million bail after pleading not guilty to rape, a criminal sex act, sex abuse, and sexual misconduct charges for incidents involving two women in May 2018. At the event, he was flanked by several companions, male and female, and his group was sitting at one of the only tables in the low-lit, small room. “To me it seemed like old-school Weinstein, surrounded by actors,” said Bachman, who was there to perform.

Bachman is a rape survivor, and felt panicked. When it was her time to go onstage, she considered leaving. “But I got up there,” she said, “and he’s staring at me with shark eyes — maybe that’s just his face. So I just tried to address it as best as I could.”

Keep getting new followers today is it because my tweets are so fire? lol fuck Weinstein and thanks @ambercrollo ILY #mysecondtweet pic.twitter.com/hLjWn5VM8Y

In the above clip, you can hear several people boo Bachman. According to Stuckless, the hecklers included event organizers and bartenders.

Eventually Stuckless and Rollo confronted Weinstein, who showed no emotion. "I went in and called him a fucking monster and told him he should disappear. His friend/body guard/goon/family member called me a cunt and I really really wanted to lunge over the table and strangle him..."

Both Stuckless and Rollo were kicked out of Downtime.

Let me explain that one more time, an event that was supposed to support actors and artists invited a serial rapist who has ruined at least 87 actors lives and supported that monster over an actor in the room. They supported HIM over all the actors in the room.

As Gothamist reported, Actors Hour released (then deleted) a statement claiming that Weinstein "was NOT invited by the organizer or anyone associated with the organization."

However, other sources have stated "that he was personally invited by the organizer and had a table reserved especially for him ..."

Dear Patrons,
We want to address some concerns about a recent incident at Downtime.

A company called Actors Hour rented our bar for a private event, with a guest list all their own. Shortly into the evening, one guest began heckling another, causing a disturbance to everyone in attendance. After several requests to stop were ignored, we kindly asked the heckler to leave.

Please know that our goal at Downtime is to create an environment where everyone feels welcome. We respect the privacy of our patrons and event partners, and want to ensure that all guests are treated equally, with the same service and respect.

In keeping with this goal, we made a decision that would allow the evening to continue as planned.

Commenters weren't really letting them get away with that tone-deaf response... 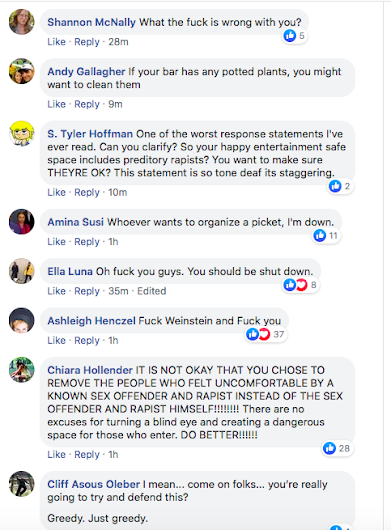 A reader shared this photo ... showing the entrance to Downtime... 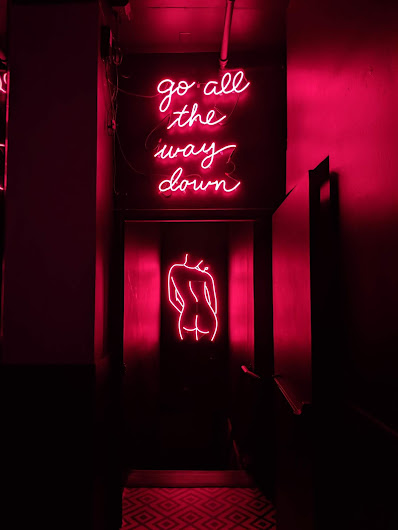 What a disgrace for Downtime AND for ACTORS HOUR. I plan on never going to anything involving either, forever. Terribly tone-deaf doesn't begin to describe the outrage.

Good for them for calling him out! The guy needs to go away forever.

I agree it's a disgrace for Actors Hour, their organizers and hosts, the venue and the venue management. You are the company you keep. Shocking that people in the audience booed a woman - a featured participating artist - for calling out the elephant in the room.

What a shame, this used to be such a nice, safe neighborhood. Now they will let anyone in.

You know what makes people not feel welcome in a bar...other people with multiple credible accusations of rape against them just chilling there like everybody's cool with them! What a trash establishment!

I heard they are inviting Louis CK to perform there next. Apparently Bill Cosby wasn't available.

Good for these women for calling him out. Remember the ending of Dangerous Liasons? He should be jeered out of civil society. "One guest began heckling another," disgraceful on the part of Downtime.

Doesn’t the sign and picture above the door, you know, kinda give you the idea what the places idea of class is...

Oof, I would recoil from any person who looks like that. Again, oof.

Sad! From Save The Robots! to Fricink Harvey Rapestein.
How low our neighborhood has sunk.
Eat the rich.

SURE---innocent until proven guilty---the 80 (number increasing ) women that have come forward should be a signal to this MORON to stay out of public view (under a rock would be fine).......

Wow. I can't believe the response from Downtime. I live nearby, and I won't be patronizing this place. In fact, I will be protesting it. Let's shut it down.