After 10 days, Bertie is found alive and well on St. Mark's Place 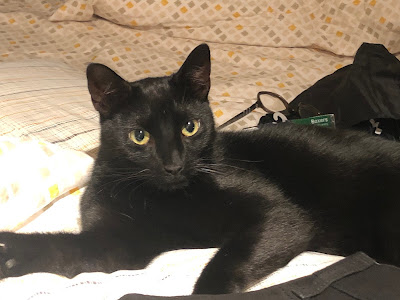 On Oct. 19, author Ada Calhoun's parents, longtime residents of 53 St. Mark's Place, were displaced by a fire in their apartment here between First Avenue and Second Avenue.

Her parents, Peter Schjeldahl and Brooke Alderson, escaped in their pajamas and bare feet at 2 a.m. A firefighter found their cat Theo. However, their other cat Bertie was missing.

They feared that he was dead. Many friends and neighbors kept an eye out for him on the block and nearby streets.

Then yesterday, Bertie turned up in a neighbor's closet downstairs.

"Apparently, he had been hiding expertly in the building and living on toilet water and mice," Ada wrote in an email. "He is skinny, but otherwise healthy and in good spirits."

As for the apartment, the unit is uninhabitable and will be for at least six months, Ada said. They were able to secure a furnished sublet in the East Village.

"It was important to them to stay in the neighborhood. They moved to that apartment 46 years ago, and have never wanted to live anywhere else!"

Previously on EV Grieve:
Bertie is missing after early morning fire on St. Marks Place
Posted by Grieve at 11:30 AM

Wow! Just "Wow"! That was a long stint.
So glad they're all back together.

so glad to hear Bertie was found & in good shape. wishing you all well and a speedy return home.

So happy to hear Bertie's been found & is well! 10 days is an eternity when you are stressing over a missing pet.

I also hope the Calhouns will be able to return to their long-time home when it's safe to do so. I've lived in my apartment for many years, and I know how much 'home' means, esp. for people who have lived there for nearly half a century. Truly, there's no place like home!

Wishing blessings to them all.

Yay! So wonderful to hear. Great news. I am a cat dad and love my cat to pieces. They are our family.

Toilet water and mice…Bertie sounds like a true New Yorker!

What a happy ending to this story! Having adopted a two year old last year who was found on the streets in another borough, I always wondered how he got there as it was obvious this sweetheart was someone's pet before it was lost or abandoned. The street is no place for a house pet. Bertie was smart...she stayed inside and remained in place until help arrived. Now Bertie is reunited with her family and what could be better than that!!! I have a feeling Bertie will be receiving more affection, hugs and treats than ever before. That is one lucky girl.

So happy that sweet little Bertie was found and is home safe. We see so many posts of "lost pets" and most often they just get weathered and get torn down but we never hear if the pets were found.

Good news all around that the owners were able to find an apartment in the neighborhood which in itself is a miracle!