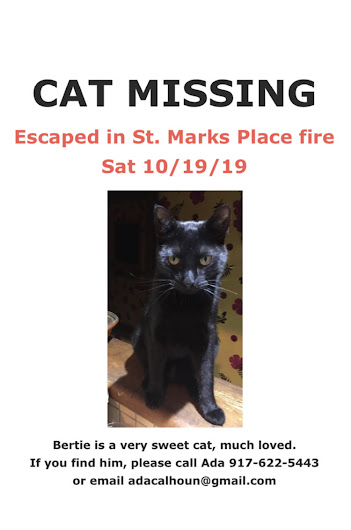 The FDNY responded to a major fire at 53 St. Mark's Place between First Avenue and Second Avenue early Saturday morning.

There weren't any reported injuries. The cause of the fire is under investigation.

Author Ada Calhoun's parents, longtime residents here, were among those displaced by the fire on the upper floors. In the race to leave their home at 2 a.m., they were able to save one of their cats, Theo. However, Bertie, their other cat, got away in the chaos.

Ada thinks that it's likely Bertie is still on the block. "He's good at hiding but he's sure to get hungry and come out at some point," she told me in an email.

The flyer above has a photo of Bertie as well as contact information should you happen to find him.

Woot! Bertie turned up in a neighbor's closet downstairs today.

"Apparently, he had been hiding expertly in the building and living on toilet water and mice," Ada wrote in an email. "He is skinny, but otherwise healthy and in good spirits."

Grieve, PLEASE update this story, so it doesn't get lost amid the other articles!