Will the new Avenue A L-train entrances open soon? 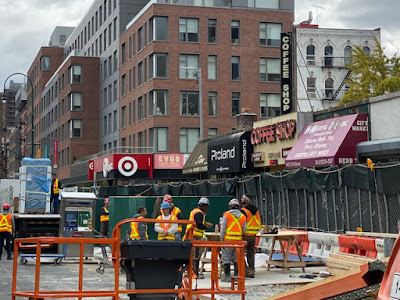 From the Grain of Salt Department over at 14th Street and Avenue A, where the MTA is putting in new L-train entrances with elevators.

An MTA worker told EVG regular Greg Masters that the south side of the Avenue A entrance to the L train (Brooklyn bound) may be open in a "few weeks," and then the north side (Eighth Avenue bound) a few weeks after that.

Backing that up, the entrances look to be in near game-time shape, as these photos from Greg show... 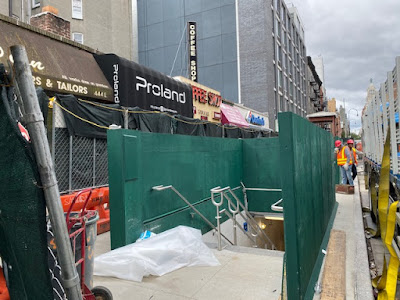 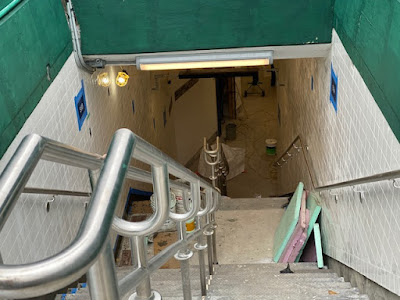 The work on the new entrances — to help relieve congestion at the First Avenue station a block away — started in July 2017.

Meanwhile, the L-train slowdown, which began on April 26, is now expected to be finished within a year — reportedly several months ahead of schedule.

Previously on EV Grieve:
To L and back: Reactions and questions over Gov. Cuomo's surprise subway announcement

This is incredible. As a resident whom lives near C and 7th, this is a game changer. It will alleviate a lot of foot traffic near the 1st Ave stop, and it will allow for shorter travel times. I also can't wait for Trader's Joes to open too. Finally, some good news.

Looks great! Way to go, MTA! That may be the first time I have ever uttered that sentence, bwahaha

Does anyone else worry that this is going to send the next wave of developers into our end of the neighborhood, trying to push out or buy out the rent-stabilized? I'm still recovering from "Sledgehammer" Shaoul's mid-00s reign of terror.

this is such good news! considering where we were before the L-train project started (facing an 18 month complete shutdown) to where we are now, I could not be happier.

This really is a game changer. As someone who lives east of 1st Ave, it felt like such a waste to walk the wrong way down the platform, only to have to turn around to walk home. 14th street between 1st and A has been crunched due to the construction... this will be like releasing a pressure valve on foot traffic

I'm hopeful for the Trader Joe's. A curbed article (that referenced EVG) suggested they were aiming to open in 2019. And the TJ website lists it as "coming soon". And from what I've seen they run a pretty tight ship, and unlike a lot of other companies they generally don't go blabbing about shit that's not firmly based in reality. Lastly the store might not look like much now, but it appears to be a similar setup to the Kips Bay store on 3rd ave, which is also entirely subterranean. Shit, I think I'm gonna have to go by today and try to get a peek.

I'll see it When I believe it.

Who loves coming up the stairs at 1st Avenue, raise your hands? Thought so, those of us in the Alpha blocks rejoice.

Prepare yourselves for a big "ahead of schedule" grand opening followed by an almost immediate closure as they find the usual entrance flooding and falling/loose tile problems that plague most of these MTA station renovations. As many times as the MTA does these projects every one of them seems like they are doing it all for the first time. After they work out the kinks, this will be a great addition to the neighborhood, but could also lead to more crowded platforms during rush hour as people can now flow into the station much faster.

Who cares! These idiots took 2 1/2 years to put in a stairway, and managed to shut 5 businesses down and torture the surrounding area during this time. They are 20 years behind the times on everything they do.

Elevators are a game changer!
Anyone with a disability needing an elevator can now use this stop. It’s disturbing how inaccessible the subway system Is for people with disabilities. We are supposed to
Be a world class city and this is how we treat people?

And we all know what a nightmare the 1st ave entrances are...enough said.

We have a nearby TJ's at 3rd. Dont need another one. Shame on city hall and Blackstone for closing the Associated. Cant buy charcoal, tin foil, drain cleaner or any of the mandatory staples that a real grocery store sells at TJ. Its a grab & go, glorified 7-11 pit stop.
Anyone else note how every day now there is another "Wanted" poster up in the neighborhood re: violent crimes? Assaults in Apt lobbies and thefts? Wasnt this bad 30 yrs ago BEFORE gentrification. What is going on??