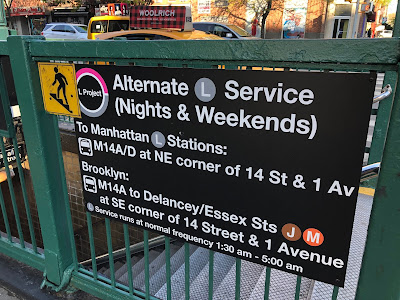 We are now officially in L-train slowdown mode for the next 15-18 months. 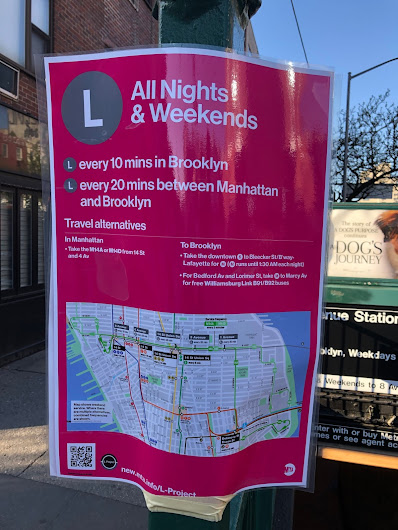 On Friday evening, the MTA started its service reduction to repair the Sandy-damaged tubes between Manhattan and Brooklyn, ramping down L times to 20-minute waits starting at 8 p.m. to 5 a.m. during the week and around the clock on weekends. (Here's the MTA press release on it.)

The slowdown's debut on Friday received so-so to negative reviews, based on various published reports and social media accounts.


Jake Offenhartz has a nice recap of the first night — featuring broken arrival clocks and hour-long waits for trains — over at Gothamist.

For many of the city's regular L riders — a group that numbers 400,000 on a normal day — the reality underground was a far cry from the governor's description of "service that would still work." In Union Square, crowds were penned in along barricades on the mezzanine level, in some cases waiting to board an open train that wouldn't arrive for close to an hour. Transit workers, stationed across the system in large numbers, practically begged customers to make use of the increased service on the M, G, and 7 lines, or the free transfers on the M14A/D and Williamsburg Link buses.

Those who did stay encountered extended waits not only inside stations, but on unmoving trains as well. The dwell times seemed especially bad at Union Square, where the MTA's interlocking system means that Brooklyn-bound service must wait for a passing train to arrive before switching over to the shared track, in order to avoid the construction area between 3rd Avenue and Bedford.

"It's worse than I thought," said Alfredo Fernando, a dish-washer at a restaurant near Union Square.

Transit reporter Vin Barone has his recap for amNY here. As he notes, the MTA's biggest challenge might be happening as you read this: making sure there isn't any lingering construction left to disrupt this morning's‬ commute.

“[We] are aware of how critically important it is to have that smooth transition so that ‪at 5 a.m. we can start back in service,” said Ronnie Hakim, the MTA’s managing director, during a trip along the L line on Sunday. “We do this. We know how to do it. It’s a function of working out all the kinks.”

You can also find coverage at the Times, who was more sympathetic in its tone with a headline: "First Weekend Disruption Is Frustrating, but Not Disastrous."

By Saturday, the L-train situation had mostly righted itself. Christopher Robbins at Gothamist explored one of the alternative methods touted by the MTA to get around — the M14 — on Saturday afternoon. "And while there were definitely more M14 buses, there is nothing to save them from getting stuck in the miserable traffic that clogs 14th Street. It took us 47 minutes to get from Grand Street on the Lower East Side to 8th Avenue and 14th Street."

Help may be on the way. In June, the city plans to convert 14th Street into a busway from Third Avenue to Ninth Avenue with very limited access to car traffic.

Look how many buses are trapped on 14th Street! Ugh.


Now to a few other observations related to the slowdown...

The MTA is stockpiling extra M14s on the east side of Avenue A between 11th Street and 13th Street ... 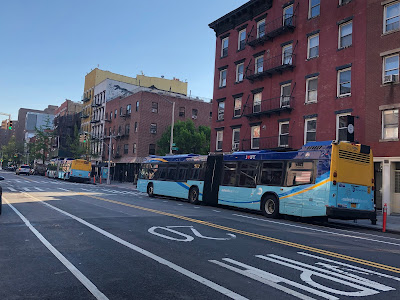 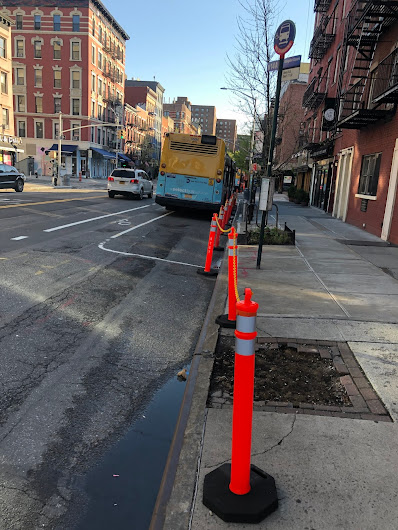 This means no parking/or standing along here for the foreseeable future... from 6 p.m. to 5 a.m. Monday through Friday, and all weekend long... 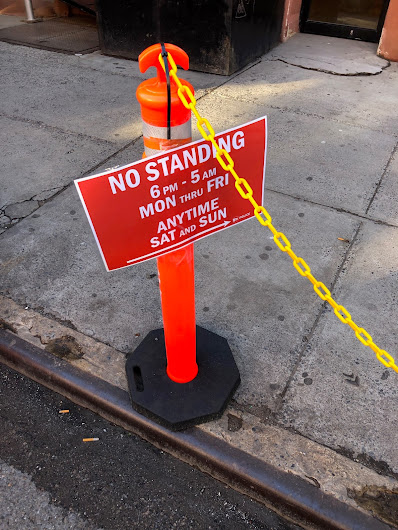 The MTA also has extra buses at the ready on the east side of Third Avenue between 12th Street and 14th Street... 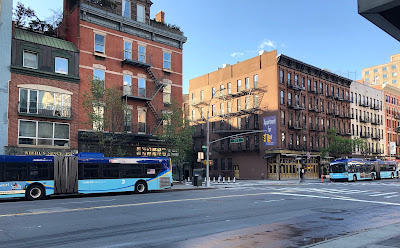 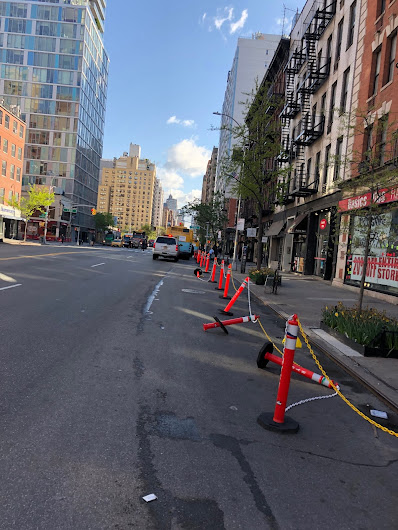 This also means no parking on this side of the Avenue ... 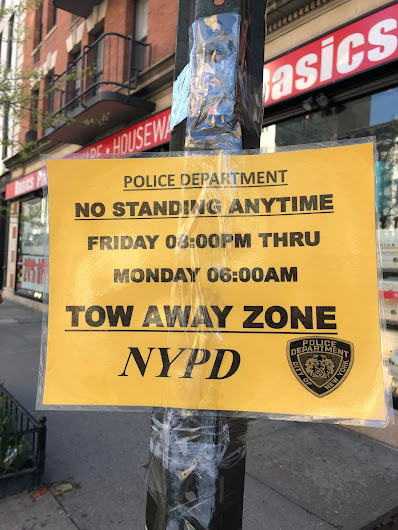 Meanwhile, the SBS bus services starts in June... and more ticketing machines have been unveiled... on the north side of 14th Street between Second Avenue and Third Avenue... 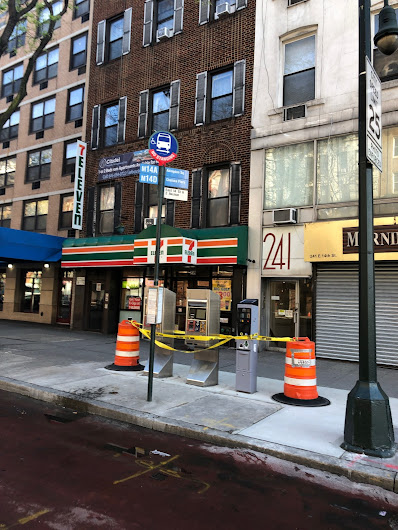 ... and the east side of Avenue A between Fifth Street and Sixth Street... 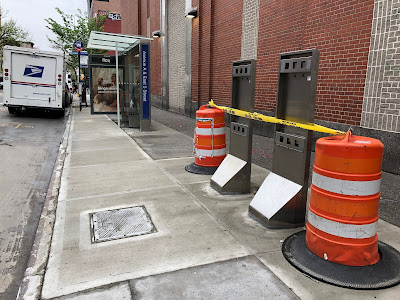 Anyone have any L-train stories to share from this past weekend?
Posted by Grieve at 4:30 AM

The street space that has been repurposed from private car parking (free private property storage on public space) to bus storage is a good showcase of the potential of good curb management . In 15-18 months, when the project wraps up, theses spaces need to be converted into loading zones for business , home deliveries and passengers drop off and pick ups and thus eliminate the problem of trucks double parked, blocking moving traffic and and blocking the Av A bike lane.

Saturday night at 9 pm I waited about 7 minutes for any eastbound M14 at 14th & 7th Ave. Gave up and started walking. None passed me in the next 30 min. At 1st Ave I thought I saw one at Third. In any event, there were many "not in service" buses. Saw at least 6 westbound during those 30 min. So much for "frequent bus service."

Hey the Uber IPO is this week right? Gosh you don't think politicians with investments would purposely sabotage public works in the interest of their stock price, no way couldn't happen

This is going to drive another cultural wedge between Manhattan and Brooklynites. Sad. People gonna eventually stop visiting each other on weekends.

The M14D bus service was not increased this weekend. Waited at Ave C & 11th for over 10 minutes for a bus that was so crowded that only two of us made it onto the bus. Then we proceeded to skip every stop until 3rd Ave because no one else fit, and the stops had anywhere from 5 to 12 people waiting to board. On my way home, I also needed to wait for over 10 minutes for a bus to arrive. Ridiculous.

BTW part of the MTA's plan for the 14th Street bus volume was to move the M7 bus which traditionally ended/started on 14th Street.
Now in order to get on the M7 uptown, it is necessary to walk to 20th Street.

Folks may not be aware that many of the M7 riders are elderly, disabled.

For people needing to transfer to the M7 from 14th Street, that means it is now necessary to walk 6 blocks on Sixth Avenue.

This is a hardship for elderly, disabled. Also, there is no other bus that goes up Sixth Avenue to the West Side to Harlem. (The 5 has now been split into 2 routes, 2 fares)

Everybody expected disaster and it didn't happen Wow. But as a friend said there's always hope!

Wow, sweating and pedaling a citibike over the 'burg bridge is starting to seem like a reasonable option.

The shit show/storm begins. Get out your umbrellas.

Anon. 10:57 - The main reason the MTA moved the stop is because of the construction currently going on at both the northeast and the northwest corners of the 14th and 7th intersection; the city, in its infinite wisdom(?) decided that the equipment and vehicles needed for demolition and rebuilding needed the space the buses had traditionally used. I used to ride that route to work, and got that info straight from several M7 bus drivers, who also told me that the first few weeks the stop had been shut down (without even the courtesy of a sign to inform riders) that they frequently had to bypass people waiting, including seniors with canes, walkers, and in wheelchairs. The real estate industry really does trump all in this town.

I see that the anti-car people are posting without fact checking first. Perhaps they don't live in the neighborhood, I don't know and I'm not assuming anything. However, the Ave A and 3rd Ave spots taken for bus staging are all metered spots which means NYC will lose valuable revenue during the construction. But hey, take those spots, remove all of the parking, along with the revenue from registration/inspection fees and not to mention the millions in ticket revenue from the whole city! When your taxes skyrocket to makeup the loss make sure you pony up your share.

DMV is state, not the city.

> millions in ticket revenue from the whole city

Think of the much larger amount raised if the city charged a daily parking fee for all private vehicles. $500 a month flat rate for unlimited if you can find a space parking.

I'm from this neighborhood. Between parking and traffic 80 plus percent of, say, 9th street is devoted to cars so four couples strolling down the sidewalk makes it very crowded. Frankly I'd rather tax you until you got long term parking in New Jersey and had to depend on ride shares. Once Uber goes under the city will tax ride shares even more and that will be some tax revenue.

Are we having fun yet? And would anyone like to address the huge amount of PUBLIC sidewalk space taken up by the Tribeca Film Festival AND by Webster Hall? From what I can see, we (the great unwashed) are not allowed to even *walk* in this area if it conflicts with big-money getting even bigger & richer.

@Choresh Wald: I'm elderly; if I take a cab to get home, I want it to drop me off in front of my building, not in a drop-off zone a block away, thanks.

@anon 1:03PM: It is true that those are meters spots but as you know they are only in effect 9am - 7pm Mon - Sat. (60 hours out of 168 hours in a week) on Av A and 8:30am-7pm on 3rd Av (63 hours out of 168 hours in a week). Majority of time they are free storage areas on public space for private car owners. Metered spots are very underpriced if you compare them to the amounts you need to pay at parking garages who represent real market value for car parking. And anyway they still need to be converted to loading zones because they will serve more people and solve the problems of double parking and bike lane blocking.

all parking should be metered and much more expensive than it is today. there should also be less of it - you could repurpose the space for pedestrian, bus, and bike use.

@anon 4:35PM: my point exactly: people need curb access in front of their buildings: you can't get that if you devote the space for storage of private vehicles that block your access to the curb

(And while you were at it, could you give us a title to go with the link?)