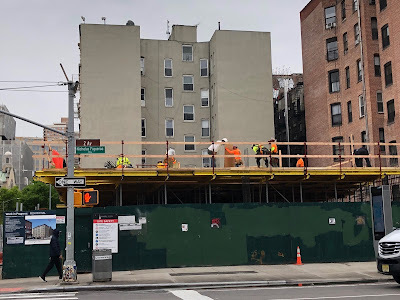 [Updated the photos — these are from today]

Work is moving at a brisk pace at 119 Second Ave. at Seventh Street, where a seven-floor Morris Adjmi-designed residential building with 21 condo units and ground-floor retail is quickly rising on the lot.

This week the building made its first appearance above street level... 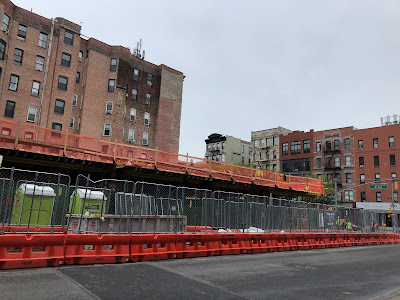 The plywood only arrived in late January ... with the excavation starting several weeks later.

Compare this pace with that of, say, 11 Avenue C, where, after two-plus years, workers have only just finished the foundation.

This previous post has more details about what has happened here to date.

LPC OKs condoplex for gas explosion site on 2nd Avenue and 7th Street
Posted by Grieve at 4:59 AM

Sigh. A community garden. A playground for kids. There are other uses for the lot. But that's hilarious, isn't it. There's money to be made. And the money made will never be enough for whoever owns the place.

A community garden ! how nice that would have been !

At least the people whose windows face the lot have been
able to get light and look out their windows for awhile.

Is it even legal to have their windows blocked like that ?

@6:34am: That's the problem with greed: there's never enough money, and human beings are not part of the equation.

Sure thing, throw in a garden instead of a building that will generate tax revenue. Instead of building new building lets slowly turn each new parcel of land back to the was it was in the 15th century. And as this happens we can all enjoy our ever growing NYC tax bill.

@1:36pm: If we stopped giving real estate tax abatements to millionaires and billionaires like candy on Halloween, we'd have money for a LOT of things for "ordinary" people.

Or do you not think the rich should pay their share of taxes??

The rich will always come out on top. They have presence, leverage, and most of all, infinite power. Cash is king. The poor and middle class, if they still is exist are all fucked.

It would be fitting if they were to invite back all the people who were displaced by the blast and give them first dibs. Not gonna happen, but nobody ever said this was a just world.

The wealthy will never be satisfied. Why do you think many are miserable and lost? I have known quite a few back home in the UK. After you have accumlated massive wealth, what is next? If you are able to purchase anything you desire or live anywhere you want or have anyone you want, what happens internally? This is where happiness reigns. From within. The insensitive bloke of this building probably sees this as an investment and nothing more. Several million dollars to him is like a twenty in our pockets. Its nothing. I do reckon a garden would have been a better route to pay homage to those lost in the explosion and the other tenants who lost their homes and businesses.