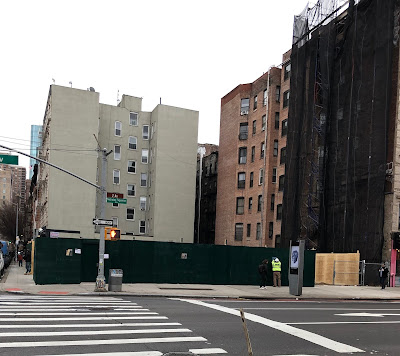 Workers yesterday finished erecting the plywood around the empty lot on the northwest corner of Seventh Street and Second Avenue, the site of the deadly gas explosion that leveled the three buildings here in March 2015. 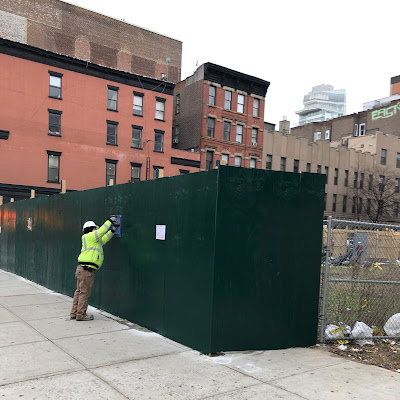 A worker on the scene told EVG correspondent Steven that the excavation for the new 7-story condoplex will commence in about two weeks... 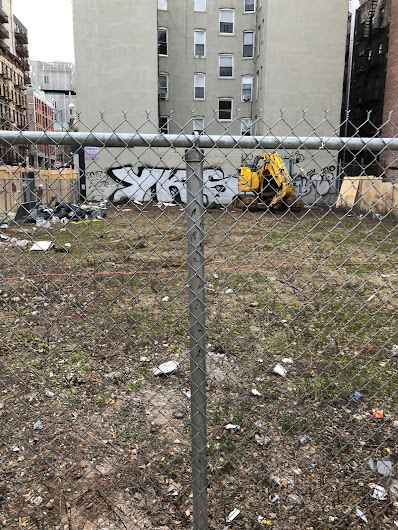 The Morris Adjmi-designed residential building with 21 condos and ground-floor retail will include a commemorative plaque that honors Moises Locón and Nicholas Figueroa, the men who died in the gas explosion on this site.

My previous post at this link has more about defendants and their latest court date.

Meanwhile, the other lot here, the former 123 Second Ave., remains inactive. That lot sold for $6 million in the fall of 2016, and the new owner has said he's not in any hurry to develop the property.

At least there is movement in spite of that unspeakable tragedy. It's been exactly almost four years now. The corner with the garbage, weeds, and crusties nearby was an eyesore. Let's hope this new building will be tasteful and completed in a timely fashion. And, I think a plaque is the least they can do. I always said a bench with the names of those young men on it would also be a good gesture.

I don’t get why the guy who bought the single lot for $6 million. Hard to imagine any kind of property development there that would be worth it for him.