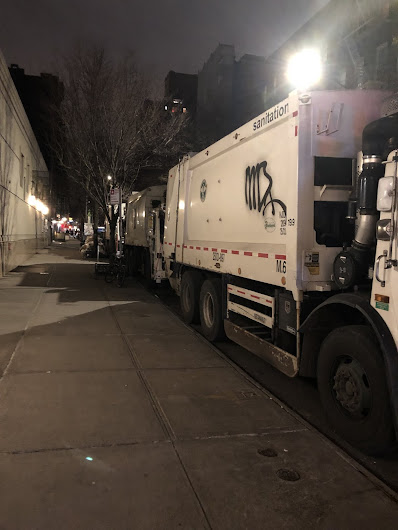 In the past three-plus months, residents and business owners on 10th Street haven't heard much, if anything, from city officials about the garbage trucks that have been parked on the block just west of First Avenue since September.

"Nothing has been done and garbage trucks continue to park on 10th Street," said resident Michelle Lang, who noted one minor improvement — there are sometimes just three trucks here instead of seven. "But the quality of life and safety concerns that the wall of garbage trucks create remain." 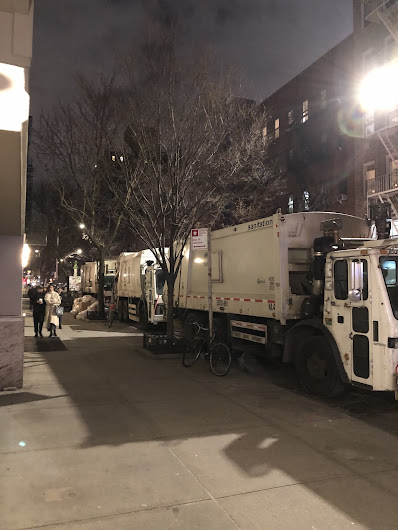 As I first reported on Sept. 18, the DSNY is using part of 10th Street for up to seven trucks. The DSNY no longer has use of their garage at 606 W. 30th St., and are relocating their fleet elsewhere.

This move — apparently done without consultation with Community Board 3 — sparked numerous complaints this past fall from residents and merchants alike who have called out the problems with the smell, noise and negative impact on business.

Before Theater for the New City moved into its current home at 155 First Ave. near 10th Street in the late 1980s, the Department of Sanitation (DSNY) used the building for storage. As Off the Grid noted in a 2012 feature, "When the Theater for the New City purchased the former First Avenue Retail Market building there was stipulation that they had to still share part of the space with the Sanitation Department for a time."

Pinks, the bar-restaurant at 242 E. 10th St., is the business most directly impacted by the parked trucks.

In a recent email, owner Avi Burn said that the trucks still provide "a pretty nasty backdrop for customers looking out the windows."

And he doesn't really feel as if the issue is still on anyone's radar.

"It's on their radar like a nagging house fly would be on someone's radar," he said. "I don't believe anyone truly cares but they are forced to respond to us when we make noise about it. Yet, no solutions have been presented to us."

As I understand it, the meeting was, in part, to find a solution to the parking issue. The elected officials were said to be upset by the lack of movement with finding a new location for the fleet. In the end, the DSNY agreed to further explore alternatives and move the trucks, but they have not finalized a timeline.

A rep for Sen. Hoylman told me this: "We are awaiting information from the DSNY and will continue to work together to forge a solution."

Local elected officials continue to press city for alternatives to parking garbage trucks on 10th Street; muggings now a concern
Posted by Grieve at 4:16 AM

Finally, a parking travesty that pedestrians, cyclists, and alternate side parkers can agree on; no one wants garbage trucks parked on the street!

Ari - your biz is cool but I can't feel bad considering you bring the trash of Santacon as a Santa con supporter. So they are just there to clean it up.