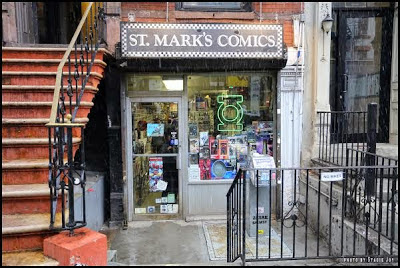 After 36 years on the block, St. Mark's Comics has announced that it will close at the end of February.

The announcement came via social media early this evening (rumors started circulating earlier in the day)...

Yes.
After 36 years of serving the #EastVillage, world famous St.Mark's Comics will be closing at the end of February.
Thanks for all your kind words and concern as word has gotten out.
We will be starting our store-emptying #sale tomorrow morning @ 11AM.
Stay tuned for more!


In a brief phone conversation this afternoon, longtime owner Mitch Cutler said that a variety of factors, from increasing rents to changing consumer shopping habits, played a role in his decision to close up shop here at 11 St. Mark's Place between Second Avenue and Third Avenue.

"There are a number of things that contributed to [the closing]. I have been working 90 hours a week for 36 years, and I no longer have the wherewithal to fight them — all of these various reasons," Cutler said. "It is challenging to have a storefront business in New York City for a number of reasons ... it is challenging to keep and maintain a retail storefront and there are enough impediments now that — like I said, I'm exhausted and can't fight them anymore."

For now, he expects the shop to remain open through February. "Something could change, but that is our expectation," he said.

He hasn't given too much thought about post-St. Mark's Comics life and the future. "I suppose after I've slept for two weeks I will begin to consider what that is."

"We have not ruled anything out, but we have also not planned for that. There are conversations, but they are in the earliest of the early stages."

For now, he's focusing on a store-clearing sale that begins tomorrow. 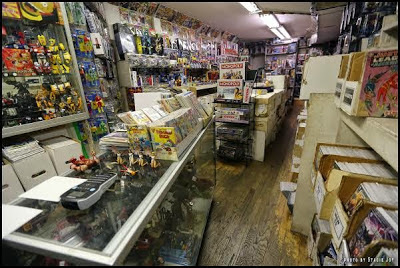 Cutler said that he told his staff about the closing over the weekend, and has just started informing shop regulars today. The reaction so far?

"Universally it has been very sweet and very touching. People are telling us how much they'll miss us and how upset they are that we're going. We have known many of these people for a very long time," he said. "We are trying to keep it a celebration and not a funeral. It gets emotional some time, but we are trying to keep it happy."

Previously on EV Grieve:
A visit to St. Mark's Comics
Posted by Grieve at 5:43 PM

The next generation isn't really opening up stores are they. That means Mr Cutler's is the last generation. Not that anyone can blame millennials and gen x'ers for not going into retail in the 20teens. I salute Mr Cutler along with all the shops that once made this neighborhood cool. There was a time when retail had a soul! That time is over unfortunately.

All good things must come to an end. It was a good run while it lasted.

Hard to sound upbeat when the event is so sad.

In instances like this (and Old Devil Moon), I wonder why the business can't be sold to someone else who will take over and keep it running. I've never owned a business, so I don't know how these things work, but it's a shame to lose a good thing.

The problem of retail includes online stores and now, comics can be bought as digital files... comic book stores are getting the same heat as the record stores got...

This is sad just like when the bat cave closed.

I dont get how landlords are so short-sighted: if they don't have competitive rents businesses can afford, they'll never fill these spots again. Do they not know about this thing called the internet?

Another store which will probably remain vacant for months while the landlords get tax breaks. What ever happened to the Small Business Act which was supposed to keep venues like this open? So much for our NYC lawmakers. Lots of blah, blah, blah and no action.

To 9:22 What tax breaks? This is a bs story that somehow it's profitable for landlords to have empty storefronts.

I'm sad - some great people in St. Mark's Comics (and the last vestige of the old street). I still go to JeBon but - after March - there is little on that stretch of St. Mark's to hold my interest.

only rich people can afford to pay that rent. Who is going to break their back in the east village to make no money ? The neighborhood isn’t protecting small business.

Anonymous @9:37 Loss of rental income is tax deductible. While a landlord might not turn a significant profit by keeping retail space open, the tax deduction is designed to keep them from losing money. Landlords routinely hold spaces vacant until they can get their desired rents, and the tax laws enable that by offsetting their "losses."