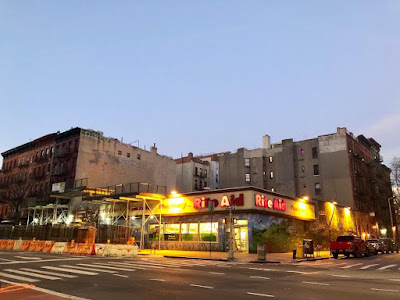 The new development site at 75 First Ave. between Fourth Street and Fifth Street has remained fairly quiet since the DOB issued a Stop Work Order here on Jan. 11, 2018.

The DOB complaint noted "no protection for pedestrians." The city rescinded part of the Stop Work Order last June in order for workers to relocate the pedestrian walkway. In September, a sidewalk bridge and scaffolding arrived to provide better cover. Workers have yet to return though to restart the 8-floor, 22-unit condoplex. Not sure what the hold up might be now.

According to Streeteasy (and the project's website), nine of the luxury residences are in contract...

As a reminder via the rendering ... 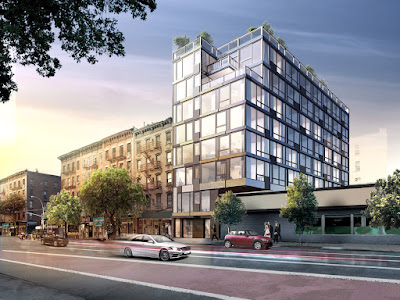 The official groundbreaking occurred here in late September 2016. No word on a completion date. 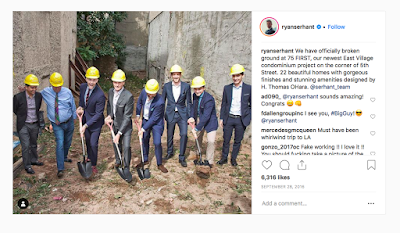 Sales underway for Rite Aid-adjacent condoplex on 1st Avenue
Posted by Grieve at 4:00 AM

Forget it - turn it into an outdoor bistro garden thing.

It always seemed like a sloppy job of setting up of the site, what with a semi-random arranged plastic barriers in front, like a giant kids toy. No wonder they were shut down.

"No protection for pedestrians" is a great metaphor for the way the real-estate parasites treat the neighborhood.

i don't think 2 wheelchairs could pass each other without getting stuck in the plywood tunnel that is there now.

This building will be if ever built will be an awkward glass eyesore for first avenue. I especially dislike how it counter-levers over the Rite Aide lot and I can only wonder how and why the owners of that lot agreed to sell the airspace over that single floor building.

It's high time for the City to disallow such. A fenced empty lot is far preferable and should be the norm until such a time that a viable building project can be completed.

A similar zombie site persists on Third Avenue, just north of 14th Street. The good news: about a year ago, they altered the sidewalk bridge to allow more pedestrian traffic to flow on the sidewalk (it had previously jutted out quite far, causing excessive crowding; pedestrians often times walked in the street instead).

EV Grieve has occasionally reported on this one — time for an update!

The longer that pile of dung remains unbuilt, the better.

This eyesore has made the block so depressing, not to mention dangerous for cyclists and pedestrians who have to move through the funnel at night and in muddy conditions. As a result, I avoid the block entirely and feel bad for the 99-cent store that is buried under that scaffolding.

It would be great if the city did more about both zombie and non-zombie construction sites. The corners of Houston and B and 3rd and C both jump to mind for the latter category. All of these seem like such obvious good use of time and money but for some reason the city does nothing.

Perhaps if those real estate geniuses pictured wearing the silly looking yellow hard hats on would trade in their shiny Men’s Wearhouse polyester suits and Fayva-brand wingtip shoes, maybe then they could get some actual work started on this zombie construction site.

Saw them diggin in the middle of the night last year with a back how deep and right next to the adjacent building... sketchy!

I hope that these developers saw the story on melting ice in Anatartica that ran on CNN today. The Antarctic ice is melting 6 times faster than it was 40 years ago, and if it all melts, the water in the East River would be 140 feet deeper, putting the Brooklyn Bridge and most of the city completely underwater. That measly 10 foot tall barrier that DeBlasio is planning to protect lower Manhattan, along with the destruction of East River Park by tearing down all the trees, looks like an even more of a fools errand now.