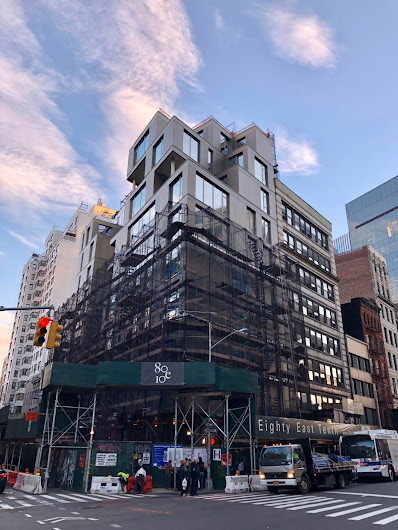 On Thursday, workers started removing the scaffolding and construction netting from 80 E. 10th St., the ultra-swank condoplex at the southeast corner of 10th Street and Fourth Avenue.

And how it looked Saturday... 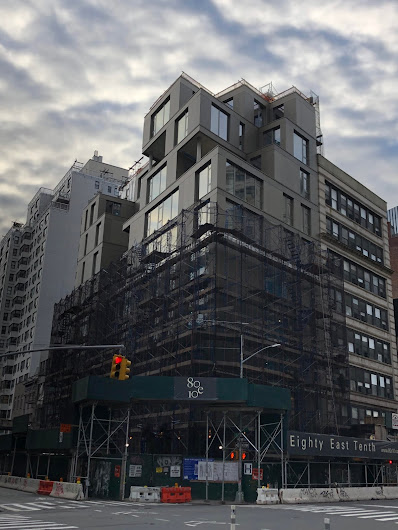 There are 12 units here in the development called Eighty East Tenth, ranging from one to five bedrooms. (The Eighty East Tenth website lists one unit still available, a unit on the sixth floor for $7.85 million.)

The building will also have ground-floor retail.

As noted before, a one-level row of businesses were on this corner, including a market and St. Marx Music, until 2007.

Previously on EV Grieve:
Selling Eighty East Tenth
Posted by Grieve at 4:04 AM

I cant wait to never afford to live there.

East Village.....death by a thousand cuts.

Stop it. I think it is beautiful. I can afford to live here and I just might submit an applicaiton to the building managment once it is open. Positive thoughts.

Definitely a 2 on the Bristol Stool Scale ("sausage-shaped but lumpy").

Construction Jenga. Nothing "positive" about this mess of lumpen, haphazardly stacked cubes. "Edgy" does not good architecture make.

It really is ugly. Dark and ugly. Maaaan...

Ooh, designed by Darth Vader on a bender? Or just by failing architecture students on a dare? In any case, UGLY AF.

The ONLY reason to live there would be to not have to look at it.

An expensive self-storage container on the Avenue! Clearly an inspiration that will be demolished during the next thirty accounting years. Enjoy!