The Troll Museum briefly checks into the Ace Hotel 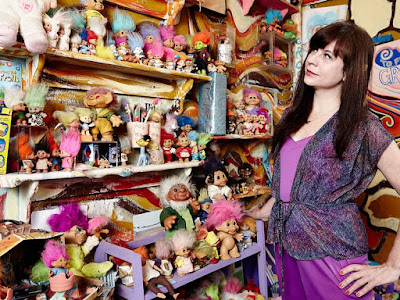 Reverend Jen's Troll Museum has been enjoying a return engagement this week... in partnership with the Outsider Art Fair, pieces from the Troll Museum are on display in the Ace Hotel lobby on 29th Street between Fifth Avenue and Broadway.

The Times has a piece in today's paper on Reverend Jen and the museum's history....

For 16 years, Reverend Jen managed a sprawling version of this installation in the cramped living room of her sixth-floor apartment on Orchard Street. She called it the Lower East Side Troll Museum, and it became a wacky downtown landmark accessible by ringing her buzzer. Fans of the kitschy dolls, which became popular in the 1960s, made pilgrimages from around the world to visit her collection. But when she was evicted in 2016, the museum abruptly closed, and an oasis of strange vanished from the Lower East Side.

“The troll museum is probably the silliest idea I had in my life,” she said. “But people responded to it, so I have to keep it going. If more people carried out their silly ideas, then the world would be a more interesting place.”

Reverend Jen also seemed pleased to bring the trolls out of retirement, even if her exhibition space is located awkwardly behind the hotel’s front desk. “I’m really excited to be doing this because the last few years haven’t always been so great,” she said. “When I ring buzzers at my old building, I realize no one I know is left. It feels like an anvil on my chest.”

She is living in Sheepshead Bay these days.

Trolling a Hotel will be on display through tomorrow.

Previously on EV Grieve:
Reverend Jen departs her LES home, and Troll Museum, for now
Posted by Grieve at 10:26 AM

Love my elf eared fairy sister! I carried bags of trolls down the stairs when she got evicted it was kinda depressing.