ICYMI: There was a slight decline in the number of NYC chain stores this past year 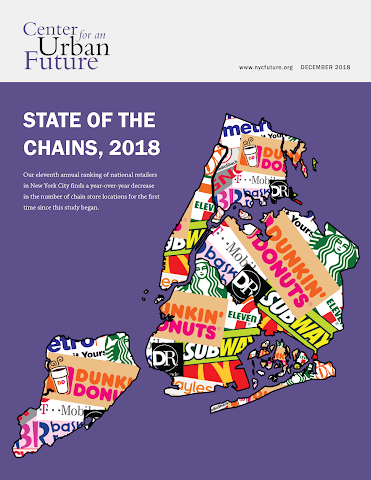 ICYMI (I did!): The Center for an Urban Future released its 11th annual ranking of national retailers in New York City late last year ... and their analysis reveals a 0.3 percent decline in the number of chain stores in 2018, marking the first year-over-year citywide drop in national retail locations since they began documenting NYC's chain environment.

While there was a 0.3 decline overall in the five boroughs, the number of chain stores decreased by 2.3 percent in Manhattan, which amounts to a loss of 67 locations, according to the report.

Here's more from the report...

Our 11h annual analysis of national retailer locations in New York also finds that more of the city’s chain retailers are shrinking than growing for the first time. Buffeted by headwinds from online shopping, a record 124 retailers — 37 percent of the 331 national retail companies in our study — reduced their footprint over the past year. This compares to 99 retailers that registered a net gain in stores over the past year, and 108 retailers whose footprints remained unchanged.

Overall, our analysis shows that the 331 retailers listed in last year’s ranking reduced their total footprint in New York City by 27 store locations, declining from a total of 7,876 stores in 2017 to 7,849 stores in 2018 — an 0.3 percent decrease. The slowdown is led by Manhattan, where the number of chain store locations shrank by 2.3 percent — the sharpest single year decline to date. In every other borough, the number of chain stores increased again this year.

The pullback was most pronounced among merchandise retailers that are struggling to compete in an age of e-commerce, with broad-based declines among retailers selling clothing, shoes, accessories, jewelry, and cosmetics.

A few other takeaways...

• Starbucks has more stores in Manhattan than any other national retailer, with 227 locations.

• The 10003 zip code, which includes parts of the East Village west of First Avenue, Union Square and stretches of Fifth Avenue, has the second-highest number of chain store locations in NYC at 173 (down from 179 the previous year). No. 1: the New Springville neighborhood in Staten Island (10314) with 180.

Something to keep in mind, via the Greenwich Village Society of Historic Preservation:

[T]he report counts and ranks the number of chain stores, not their concentration, i.e. how many chain stores are in an area as a percentage of the overall number of stores; thus a zip code may actually have a very high number of chains but a relatively low percentage, and vice-versa, depending upon how much area it covers and how many shops there are in the area...

>>Subway is still in third place with 330 locations despite having lost 103 locations since last year. <<

That's a fall-off of nearly 24% year-over-year. One has to wonder what the culprit is. Sub-par food? Unsustainable economics? The Mother Ship's constant craving?

Several Subway entities failed in this zip code, including different franchises in the same space on Third between 15th and 16th. The space on the NW corner of 16th and Third, where Mariella used to serve pizza, remains vacant. Surely some quick-stop style retailer has approached and been rebuffed; is the tide turning in my zip code away from the chain?

People used to come to the EV for an alternative to the American dream, They didn't want to be their parents. Today, that's changed. New residence come here and bring their expectations with them or they try to recreate them. Like Americans abroad... they look for McDonalds and Starbucks. In the EV they look for frat houses and Walgreens. B-O-R-I-N-G!

Those walk-in clinics are closing down in droves, along with Duane Reades and their pharmacy/clinic locations. There are at least four urgent care centers that have shut down on or near East 23rd street in the past few months, plus Northwell Health on 3rd ave and 16th Street near the empty Mariella Pizza is gone. Too many of them opened at the sme time, and they were within a block or two of a competitor. I guess they had cash to burn.

Billsville, I have always thought that those walk-in clinics could make a go of it if they didn't place such restrictions on their hours. Early in the morning or late in the evening, there are no alternatives except for the emergency room. We're a 24-hour town, and it's a pity that that's not addressed.

@8:46PM. That’s a good observation, these places are often closed, as if illnesses happen on a schedule. I’ve used a few of them and they are always good, and its much better than going to an emergency room. Either the doctors who run these places weren’t making enough money, or they didn't like the hours required to make these place work. CityMD seems to be the best of them, but the one on 14th Street closes at 8PM, while the one on West 14th closes at Midnight, so they seem to realize the need for extended hours.

Doesn't matter to me that chain stores are slightly down in 2018/19. General bullshit is still at an all-time high.