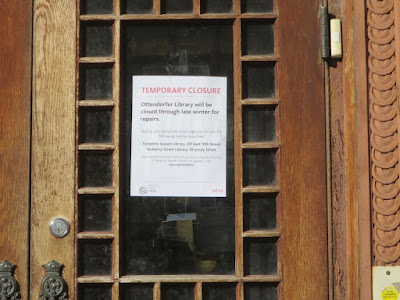 The Ottendorfer Library, 135 Second Ave. between St. Mark's Place and Ninth Street, closed for upgrades this past Aug. 6.

According to a message to patrons from branch manager Kristin Kuehl, workers are installing a new fire alarm and life-safety system. "Due to the building's age and landmark status, the project is expected to take six months," Kuehl wrote this past August.

Some patrons were hopeful for a February return. A new-ish sign on the library's front door (thanks Choresh Wald!) now notes that they will be closed through "late winter." The first day of Spring is March 20. So there's time left for late winter.

Anyway! Here's some history of the branch, cut-n-pasted from the previous Ottendorfer post...

A visit to the Tompkins Square Library branch on 10th Street
Posted by Grieve at 4:15 AM

Thanks very much for this post, I have been wondering about this. Please please please reopen soon, Ottendorfer! I

I miss Ottendorfer so much. I asked at Tompkins Square a few weeks ago if they had any word on when it would reopen, the librarian heard late January. Fingers crossed!