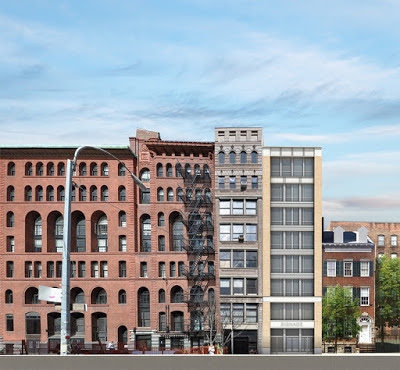 [Via SRA Architecture and Engineering]

The development firm Kalodop II Park Corp., who has been trying to build a hotel adjacent to the Merchant’s House Museum on Fourth Street between the Bowery and Lafayette, is now suing New York City, the City Council and Councilmember Carlina Rivera over the rejection of their ULURP application for the project.

The Real Deal first reported on the suit:

Kalodop’s lawsuit, filed on Tuesday, asks the court to reverse the City Council’s disapproval and enter a judgement approving its ULURP application. It argues that the Landmarks Preservation Commission and the City Planning Commission had already approved their project and attributes community anxiety to “a grass roots campaign of fear and misinformation” from the Merchant’s House Museum that “spurred local community members and representatives into action with a false narrative that any construction at the property would cause the Merchant’s House to be catastrophically damaged.”

The developers were seeking a spot rezoning to build an 8-story hotel on the site — higher than the current zoning allowed. The public review process, the Uniform Land Use Review Procedure (ULURP), began last spring. The full City Council ultimately voted down the rezoning this past September.

Preservationists, not to mention the leadership of Merchant's House, the circa-1832 building, were concerned that the construction could permanently damage the structure, one of only six residences in NYC that is both an exterior and an interior landmark. Sen. Brad Hoylman, Borough President Gale Brewer, Assemblymember Deborah Glick and Community Board 2 were also opposed to the current application for the 8-story hotel.

The developers had promised to take extensive measures to ensure that the neighboring structure would not be harmed during the hotel construction.

This project dates to 2011. After several hearings through the years (here and here, as examples), the Landmarks Preservation Commission eventually signed off on the project (in 2014) as did the City Planning Commission (last August).

Not mentioned in The Real Deal article: The developers can still build a six-story building on the site even without the rezoning. They also own the lot around the corner at 403 Lafayette St., which the Merchant's House has suggested would make a better spot for the hotel.

Previously.
Posted by Grieve at 4:01 AM

A hotel would be nicer looking than the hot dog vendor business, however......they acquired the property on spec and that is what happens when you speculate. They speculated that they could get the lot zoned for greater heights. Sometimes you win, sometimes you lose.

It's all about intimidation... They have no legal standing unless they somehow know the City will cave after a redesign. I hope not. But with Mayor Bill... well...

Re: "A hotel would be nicer looking…" Did you take a gander at the banal building in the rendering? I'd much rather have the hot-dog vendors, frankly (apologies)