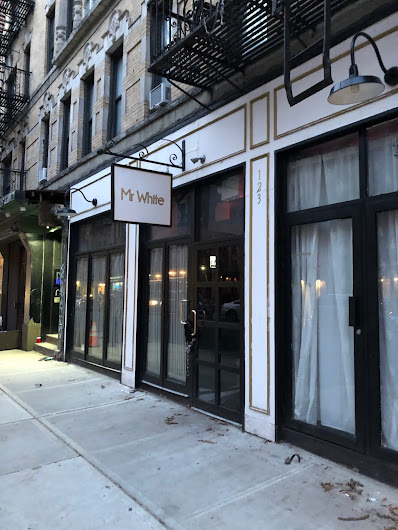 Word is circulating that Mr. White, the upscale, New Orleans-themed restaurant at 123 St. Mark's Place, has closed ... a chain lock was on the front door when Mr. White was scheduled to be open on Saturday evening... 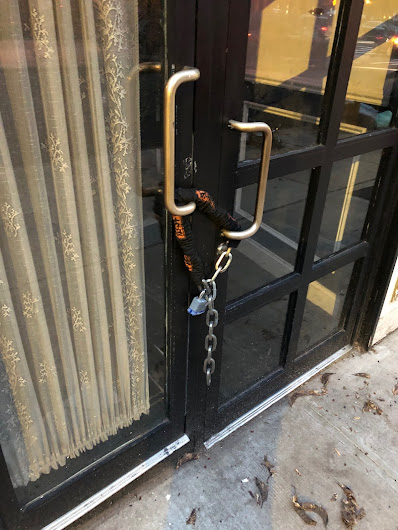 The restaurant's phone is out of service and its website is offline... Yelp reports that Mr. White has closed.

The address was previously home to the Belgian Room, which the state seized for nonpayment of taxes in April 2015. The reconfigured Mr. White space also includes the former Ton-Up Cafe.
Posted by Grieve at 4:14 AM

Shocked that this took so long. It was empty most times, and with the crystal chandeliers and serving “Po Boys” it was completely out of place on St. Marks. As I said at the time, it would have fit in better over in the West Village on Beford & Barrow. With the lack of regular customers, the only way to survive would have been to cater more private parties and weddings, but what non-Punk bride would want the grimy East Village as the backdrop to her Whiite Wedding?

I am not surprised. The wriiting was on the wall. I shutter to imagine what else will replace this spot. Given the enormity of the rising rent and the lack of patrons walking by, the next business here must be a destination. Otherwise, the fate of this venue will be like the others: gone in a heartbeat. Gotta love NYC kids.

This Yelp revie from last November, from someone who lives above Mr. White, shows that the handwriting was on the wall. They claim employees were complaining months ago about not getting paid:

Live directly above the restaurant and can always hear disgruntled employees in the back courtyard taking thirty minute breaks to scream and cry about how terrible management is and that they haven't seen a paycheck in weeks.

Gotten sick off their oysters because they were old (reason why they push the fried oysters instead of raw so hard) and haven't touched an oyster anywhere in six months as a direct result of my experience at Mr. White.

Will give kudos to the bartenders for trying to entice people in by comping all the drinks but everyone that lives on this block is keenly aware what a sad song this restaurant is. Very ready for them to throw in the towel and give up the jig... painful seeing it so dead and enduring the god awful fried old oyster smell every single day.”

Their fried chicken was great, but even the name was a bit odd in this day and age. that's a prime spot, hopefully something good opens in their place

Why would anything billing itself as "upscale" open on St Marks?

CB3 just approved a full liquor license for them in December, AGAINST the wishes of the neighborhood. Way to go, they gave the owner a license to sell and profit from and it leaves the residents of the neighborhood with another bar, exactly what St. Marks needs.

It’s because people see food tourists lining up at places like Big Gay Ice Cream & think their new place will attract tourists as well. So many of these places aren’t geared towards locals, or even anyone in particular.