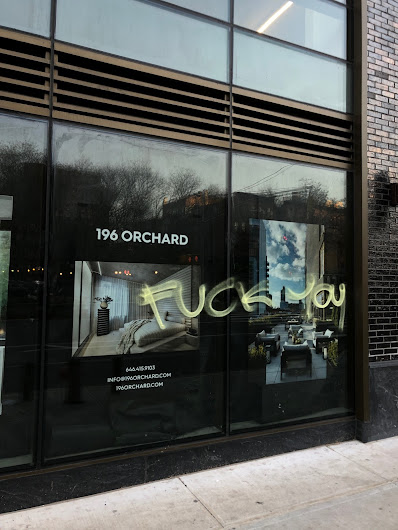 [A note at Ben Shaoul's new condoplex next to Katz's]

As we've been reporting, City Council held an oversight hearing on the secretly revised East River Park stormproofing plan on Wednesday afternoon. Gothamist and Curbed had reporters at the well-attended hearing. Find their recaps at these links:

A visit to the East 14th Street home of aerialist Phoenix Feeley, who is subletting her place that is outfitted with a trapeze hoop. However: "The hoop will stay in a locked closet, for use by any tenants with the proper training and insurance." (The New Yorker)

The MTA postpones its fare-hike vote — until next month (amNY)

Inside the fight over the Elizabeth Street Garden (Curbed)

An appreciation of the late Saul Leiter, artist, photographer and longtime East Village resident (Off the Grid)

"Burning," the critically acclaimed South Korean thriller from Lee Chang-dong, got snubbed in the best foreign-language film category in the Oscar race. Anyway, it's still enjoying a run at the Quad on 13th Street (Official site)

A rando ICYMI: That video of Beto O'Rourke on rhythm guitar in a onesie and sheep mask playing (with a band) "Blitzkrieg Bop" (Mother Jones)

... and if you happen to have a subscription to The Economist, then you can read a feature on Alex Harsley, the photographer who runs the great 4th Street Photo Gallery on Fourth Street between Second Avenue and the Bowery. The piece is titled "Alex Harsley is an unsung doyen of New York photography."

The city has been Mr Harsley’s home since 1948, when, aged ten, he moved there from South Carolina. He took his first photograph ten years later, and became the first black photographer to work for the city’s district attorney’s office. His scintillating pictures freeze moments in New York’s evolution from the 1950s to the present.

You can also head into the EVG archives for this two-part interview with Alex from January 2014. 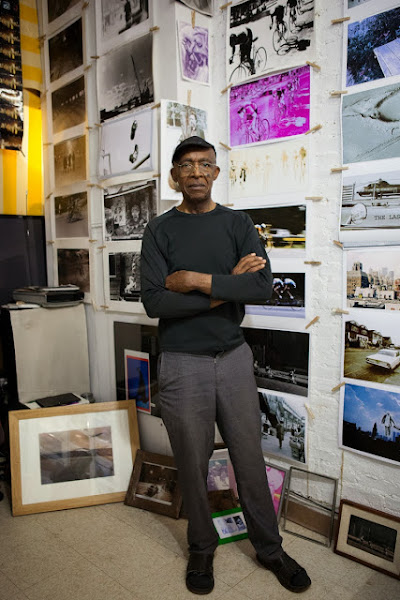 [Photo for EVG by James Maher]
Posted by Grieve at 7:05 AM

Though I don't approve of vandalism, I agree with the sentiment. We can't forget Shaoul's mistreatment and harassment of his East Village tenants, especially the residents of the former Cabrini old age home on Ave B (and by extension, their families). Sadly, now it seems Shaoul will never be called to account for all his alleged corrupt abuses, the way Croman was, because he managed to "go legit" and become a real builder, not just a landlord, so now he is a darling of the New York Times real estate section. All they do anymore is ballyhoo his latest project and heap praise on him for being able to shed his former identity as "Sledgehammer" Shaoul. At one time, it would have been appropriate for the attorney general to investigate his shell corporations for allegedly bribing workers in both the Landmarks Commission and the Department of Buildings, given the damning circumstantial evidence. But that ship has sailed, and so yet another wealthy and manipulative bad-faith actor is allowed to take his place in the upper echelon of society.