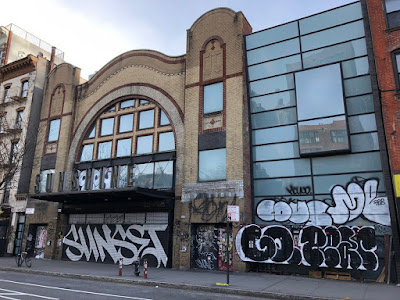 I took these photos of the former Sunshine Cinema this morning on Houston between Eldridge and Forsyth. The five-screen theater closed last Jan. 21 after a 17-year run. 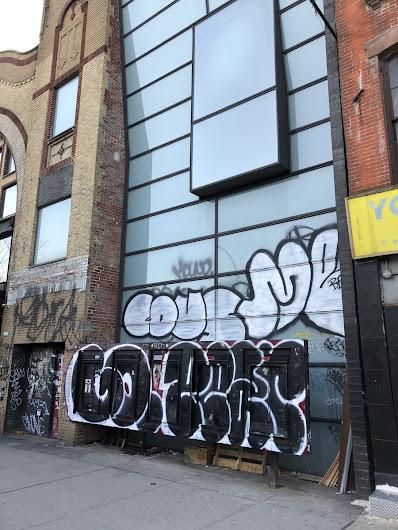 The structure, which dates to 1898, is still awaiting demolition to make way for a 9-story boutique office complex with a retail component.

East End Capital and K Property Group, who bought the building for $31.5 million in the spring of 2017, have launched a website marketing the spaces. 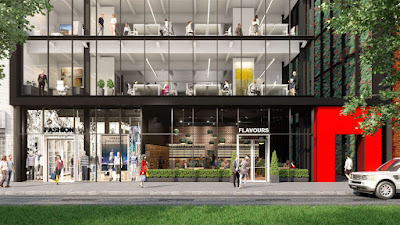 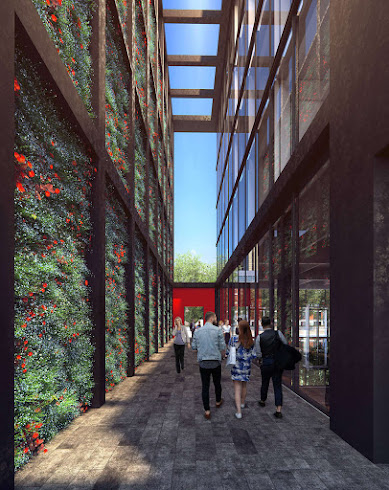 In March 2018, Gregory Kraut, a managing partner at K Property Group, said that the theater would be demolished in two months.

As Curbed noted in January 2018: "Rising rents put the theater into financial duress; it was served a death blow in 2012 when the Lower East Side community board rejected Landmark’s proposal to offer food and beverage service at the theater."

The boutique office building replacing the Sunshine Cinema will be 'unbounded by walls' with an outdoor space called Houston Alley
Posted by Grieve at 12:22 PM

Why can't city make a deal with developer - let them have 10 floors above theater if they keep theater - maybe rehab it for live events?

So fucking tragic and infuriating.

I still have a coupon for one free popcorn from the night that none of the air conditioning was working in the middle of a July heatwave. I want my free popcorn.

I am surprised the architect is fine with this.

I am not surprised nor would I expect anything less from these greedy fuckers whom are slowly dismantling our beloved city and its neighborhoods. A normal person would have thought by now there would be some movement. But no. I don't think anyone will ever forget this gem of a place that withstood time between centuries and everything else in between. Why take apart something magical and sacred just so one can have a modern monument of sterile offices and retail spaces? As if Manhattan doesn't have enough vacant storefronts and name brand stores. I want to be transported into a time machine to the 70's and 80's where none of what we face and expereince as a vapid and materialistic culture exists . This is all so depressing.

Another iconic neighborhood institution gone. I saw so many great movies there. One of my all-time favorites was The Eagle Huntress.

Maybe there isn't any money for that utopian rendering right now?

Could be letting the building get even more blighted while waiting for "opportunity zoning" federal cash?

Given that this historic old building is still standing, is there anything we can do to reverse the process?

1:57 has the right idea, but the city's zoning laws wouldn't allow it. We need to get smarter about allowing more density so these retail spaces don't get cannibalized.

@10:44am - Sure, there's something you can do. Make the legal owner of the property an offer they can't refuse.

Our mayor and our city government care more about allowing profiteers to get rich than the citizens' quality of life.

Remember this at next election or other opportunity to tell them it enrages us.

Remember when it was a warehouse for flour storage for local Bakeries. It was a nice usage as a Cinema for the time it lasted. Houston east of First Ave is really changing, a lot of new construction most of what fell to wrecking ball was not in Architects Digest. The new residential buildings have brought people to the area the sidewalks have traffic on them. There was a time you locked your doors in the car getting to Williams burg Bridge hoping the traffic lights remained green. The times they are a chang'in.