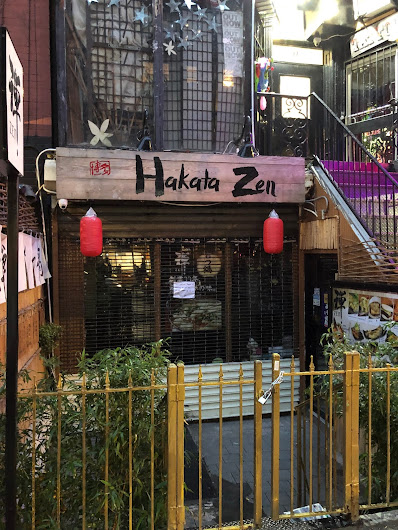 The gate is down at Hakata Zen at 31 St. Mark's Place between Second Avenue and Third Avenue. The sign says there's a renovation, with the hope of reopening as soon as possible.

The Hakata Zen website is offline, leading to some thoughts that we're in for a concept switcheroo here. That might not come as a surprise, given the recent turnover here.

As previously noted, the restaurant at No. 31 was a Hakata Hot Pot/Zen 6/Sushi Lounge combo since March 2016. A year later, it became Noodle Cafe Zen presents Sushi Lounge & Hakata Hot Pot. (This is ALL on the midterm FYI. This post recaps the switcheroo-ing.)

Updated: A commenter says a broken pipe is to blame for the closure...
Posted by Grieve at 4:03 AM

A pipe burst due to the cold weather and did damage.

I like that place. It's half priced sushi which is not really half price anymore but I still like it.