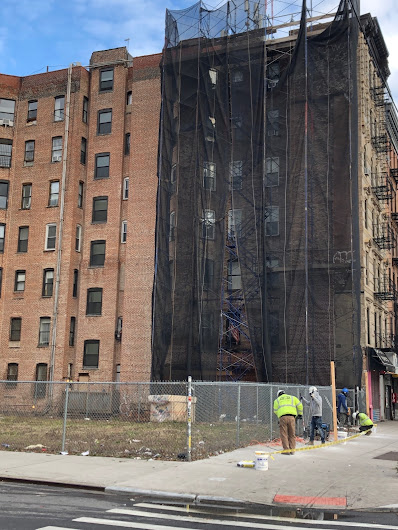 A jackhammer crew has started to break up the sidewalk this morning on Second Avenue at Seventh Street ... where there are approved plans (as of Dec. 27 by the city) to build a 7-story condoplex on this corner.

The Morris Adjmi-designed residential building with 21 condos and ground-floor retail will include a commemorative plaque that honors Moises Locón and Nicholas Figueroa, the men who died in the gas explosion on this site on March 26, 2015.

The previous owner of 119 and 121 Second Ave., Maria Hrynenko, her son Michael Hrynenko (now deceased), contractor Dilber Kukic and their plumber Anthanasios Ioannidis illegally tampered with the gas line then failed to warn those in the building before the blast, according to the Manhattan District Attorney.

According to public records, Hrynenko and the other defendants will appear in court again on March 21. Records show that Hrynenko and the other accused have appeared in New York County Criminal Court 23 times since February 2016... and the outcome was the same — "adjourned/bail continued" — since their initial appearance. There's also a new judge presiding, Michael J. Obus of the State Supreme Court in Manhattan. Justice Kirke Bartley had been the judge of record. 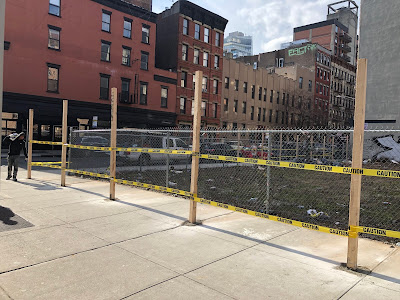 Soil testing underway at the 2nd Avenue explosion site
Posted by Grieve at 9:56 AM

How long is this friggin’ case going to take? Robert Mueller already has 10 convictions on top of 17 additional indictments in the Trump Russiagate probe. One of the main defendants in the case, Michael Hyrnenko, is already dead, and the cause of earth is still not known. One of the indicted contractors is supposedly still doing plumbing work on other buildings. This is taking way too long. New York courts are known to be among the slowest in the nation, but this is getting ridiculous,

Justice delayed is justice denied - that is what is happening here.

Those responsible will likely never actually suffer any serious repercussions as a result of this devastating event.

The answer is pretty simple. Real cases take real time to put together and prosecute. Bogus political cases- when done by either Dems or Repubs are much quicker. The DA could indict you tomorrow. It really doesn't mean anything. I do find it interesting how people ignore the unreal corruption in NY. Will Chris Cuomo on CNN ever do a story on the Buffalo billion or the MTA or the NYCHA and the sick children? I doubt it.

The real answer is that New York courts are among the slowest in the nation. Other states prosecute cases like this in less than half the time. Every time you go to court in New York, a lawyer asks for an adjournment, or a holiday is approaching, so they do a quick hearing and adjourn until after the holiday, usually months later, This goes on until someone runs out of patience or money, and then a plea deal miraculously appears, or they go to trial which takes several additional months. It’s a ridiculous system and it needs to end, Justice delayed is justice denied.