Whatever happened to ... Donostia? 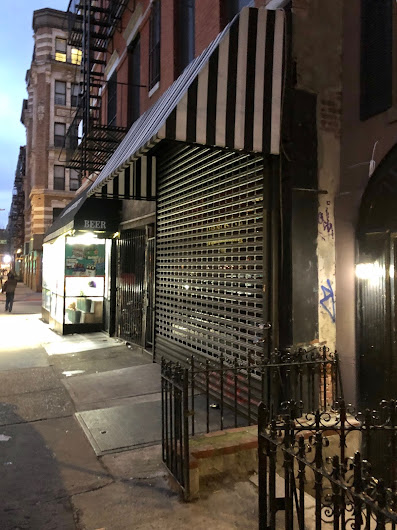 Several readers have asked about Donostia, the cafe that serves traditional Basque small plates and drinks at 155 Avenue B between Ninth Street and 10th Street.

A reader who lives nearby said that the gates have been down during announced business hours since late November. (We also haven't seen it open in the past two months.)

There aren't any messages about a closure, temporary or permanent, on the Donostia website or social media properties. Their phone is still in service, though it points to the cafe's website to make a reservation. The website says to call the cafe or send an email to make a reservation. No one responded to our email query about Donostia's status.

However, one user at Yelp, which lists the cafe as closed, added an item on Jan. 17 noting: "I emailed them to make a reservation. They responded that they're moving locations and will post and update soon. Can't wait!"

Donostia opened in November 2013 to positive notices. The operators were able to keep that momentum. In 2017, Food & Wine named them one of "The Best Wine Bars In the U.S." This past October, Michelin named Donostia as one of its Bib Gourmand-designated restaurants for the fourth consecutive year.

Perhaps a new location will serve Donostia better. In 2017, co-owner Jorge de Yarza reportedly joined forces with developer Gregg Singer, who has been trying, for 20-plus years, to covert the former P.S. 64 building around the corner on 10th Street between Avenue B and Avenue C into student housing. DNAinfo reported that de Yarza helped gather nearly 900 signatures in support of the dorm plan, asking the city to allow it to move forward.

Per a DNAinfo story published in October 2017:

The massive building's prolonged vacancy has made the block dark and unsafe, and has encouraged loitering, de Yarza added.

"All the places in the immediate area, they suffer," he said. "It's one of those stretches of 10th Street you don't even want to walk by, and it's a shame."

According to a post at the Lo-Down from September 2017, de Yarza also helped Singer support candidates running against Carlina Rivera in the most recent District 2 City Council race. Rivera, who won the election, is an ally of the outgoing Councilmember Rosie Mendez, who has long opposed the dorm plan.
Posted by Grieve at 4:00 AM

Email ThisBlogThis!Share to TwitterShare to FacebookShare to Pinterest
Labels: Donostia

This post doesn't fully articulate the controversy over the dorm project (site of the former CHARAS community center). Many people in the community are opposed to the dorm development and seek the return of the building for community use. Gregg Singer and de Yarza have campaigned for the dorm - in opposition to community leaders and groups. de Yarza was involved in distributing campaign flyers in the East Village that cited a fake community group (or appropriated the name of an existing group without their authorization). He was also involved in hiring "extras" to demonstrate in support the dorm project in front of City Hall in Nov. of 2017.

It wasn't cocktails, it was a place to try sherries. Helps if you'd had ever actually been.

With this and Cienfuegos going, we lose two specialty drink venues that will probably be replaced by generic bars.