On 9th Street, Cha-an Bonbon to serve as a to-go outpost for Cha-an Teahouse 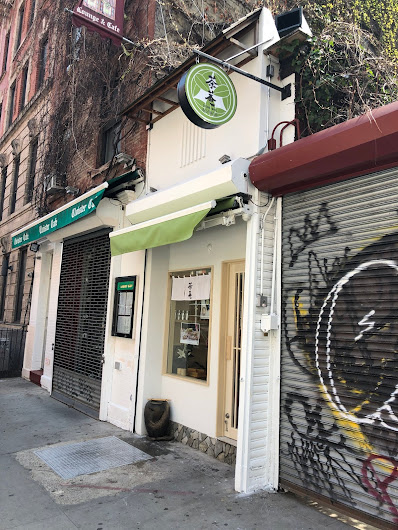 You may have noticed the new storefront for Cha-an Bonbon over at 238 E. Ninth St. between Second Avenue and Third Avenue at the site of the former take-out hotspot Yonekichi.

This location will serve as a to-go outpost for Cha-an Teahouse, which Japanese restauranteur Bon Yagi opened on the second floor of 230 E. Ninth St. in 2004.

"Tea and sweets go hand-in-hand in the Japanese tea world. As Japanese teas, like matcha, have gained traction … New Yorkers are starting to look for places that have wagashi and wagashi-inspired desserts." Hence, her family’s decision to expand.

Fans of the teahouse’s original matcha latte — made from a pre-mixed blend of milk plus In Pursuit of Tea matcha powder — will be able to order the drink at Bonbon, with the option to add other ingredients like red bean, soft-serve ice cream, and shiratama, a type of soft mochi.

Cha-an Bonbon, set to open May 1, will also reportedly offer several beverages exclusive to this space.
Posted by Grieve at 4:18 AM

Bon Yagi does it right. Best restaurateur in the neighborhood.