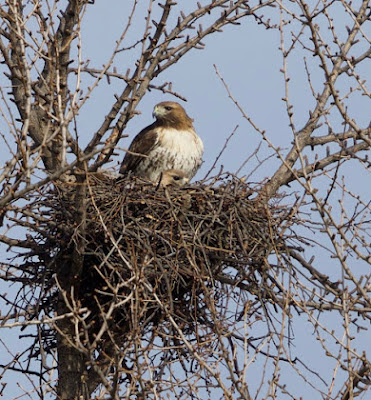 [Photo from March 20 by Steven]

There's preliminary indication coming from Tompkins Square Park that the first egg belonging to the resident red-tailed hawks, Amelia and Christo, has hatched.

I believe a hatch started or occurred on Saturday, April 20. The behavior of parents, Christo and Amelia changed that day — she kept fussing around in the nest and sitting up higher, indicating something was going on underneath her. Christo also made two food deliveries to the nest. There had been a heavy rainfall the night before, and Christo brought in several pieces of bark, possibly to create a new dry layer in the nest.

Goggla previously reported that Amelia laid the first egg on or around March 13. It's not clear how many eggs might be in the nest.

This is the first full mating/nesting season for Christo and Amelia. Last year, tragically, the older of their two red-tailed hawk fledglings died. (The whereabouts of offspring No. 2 is unknown.)

Christo and his previous partner Dora (now in permanent wing rehab as of April 2018) raised 10 hawklets in recent years.

Steven shares these nest photos from this morning... 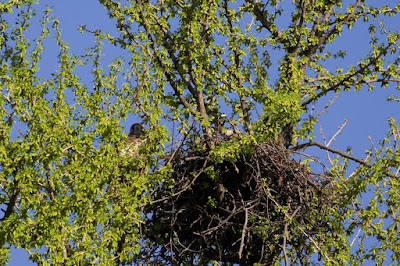 [Christo on the left] 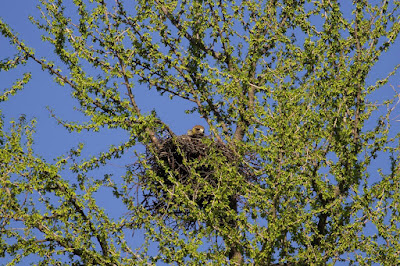 The EVG podcast: More hawk talk with Laura Goggin
Posted by Grieve at 4:30 AM