Edi & the Wolf closes after service on Sunday 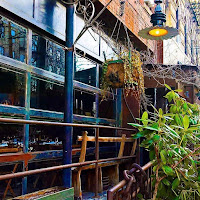 Austrian bar-restaurant Edi & the Wolf is closing Sunday after nine years at 102 Avenue C between Sixth Street and Seventh Street.

The restaurant — named after its executive chefs, Eduard "Edi" Frauneder and Wolfgang "the Wolf" Ban — is closing due to "increasing operating costs," Eater reports.

The closure had been expected, as a new applicant — listed as Rosey Kalayjian — appeared before CB3's SLA committee for a new liquor license for the space back in January in what was described as a sale of assets. The CB3 materials cited the proposal as "an American restaurant" with hours of 11:30 a.m. to 11:30 p.m. Tuesday through Sunday. Kalayjian has previously managed restaurants in Westchester and NYC.

Frauneder and Ban also operate The Third Man at 116 Avenue C. No word on the status of that bar.
Posted by Grieve at 4:01 AM

Email ThisBlogThis!Share to TwitterShare to FacebookShare to Pinterest
Labels: closings 2019, Edi and the Wolf, restaurant closings

Do you know if they plan on selling any of the interior designs?

it's tough to see them go -- such a good, reliable spot in the neighborhood

Noooooo! Agree about the interior stuff. Hope they open up elsewhere.

Just came home after having one last pork schnitzel with lingonberry jam, mustardy potatoes, cream-drenched cucumber salad, and cafe macchiato. Sat at a table by the open front and felt the gentle spring air, watched the world go by and thought about the loss of this nice restaurant. Then said my goodbyes to the friendly, professional staff and wandered home wondering why those in power who might be able to do something to stem the hemorrhaging of small local businesses don't seem to want to do more than pay lip service to the issue, leaving this - and so many other - neighborhoods with too many sad, empty storefronts.

Oh, and Grieve, I asked - Third Man is staying open. For now.