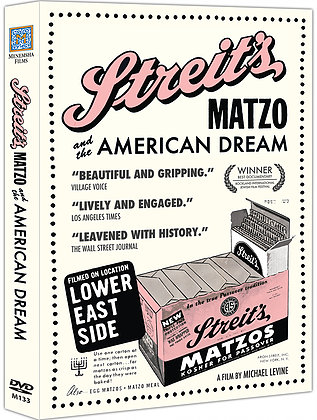 "Streit’s: Matzo and the American Dream," the 2016 documentary by East Village-based filmmaker Michael Levine, is out this week on DVD ... in addition, nearly two dozen PBS affiliate stations around the country, including New York’s flagship WNET, are screening "Streit's" throughout the rest of April and the beginning of May to coincide with Passover. (Details below.)

The documentary, which enjoyed a three-week run at the Film Forum in 2016, follows the last family-owned matzo bakery in America during their final year in their factory on Rivington Street. The factory moved out of the Lower East Side in 2015 after 90 years in that location.

The family sold its original factory to Cogswell Realty in January 2015 for a reported $30.5 million. A pricy glass box is now in its place on Rivington and Suffolk. 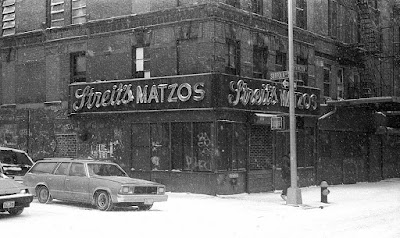 Levine talked to me about the DVD release and his continued relationship with the Streit family.

What's your reaction to the DVD coming out at long last combined with the PBS screenings?

Well, it's very exciting, of course, and overwhelming, too.

When I first began work on this film at the start of 2013, I had no idea where it would end up. I had big hopes for it, because I believed then, as I do now, that the stories of the Streit family and staff, and their connections to the Lower East Side community and immigrant history, were ones that needed to be heard. And when the Streit family ended up, during the film's production, making the extraordinarily difficult but sadly necessary decision to leave the neighborhood after a full century, the story of course took on an additional, unexpected dimension.

But, as a documentary filmmaker, you never know if your project will see the light of day, which is in large part to say that you never know if the story you personally find so important will resonate with others the same way.

The fact that the film has ended up getting so much exposure, from the festival circuit, to theatrical, and now to screening on PBS, means to me that it has resonated with people, which as someone who cares strongly about this neighborhood and deeply respects the way Streit's has run their business for 100 years, means a lot.

And the DVD coming out is exciting, too. We had to cut the film down a bit to fit time slot constraints for PBS, so the DVD offers a way of being able to share the full 83-minute version that ran in theaters. Plus, we were able to include bonus features, like 18 minutes of film dating back to the 1940s that we found in the closet at the old Streit's factory on Rivington Street — just amazing stuff from a historical/cultural perspective that would likely never be seen otherwise.

Are you still in contact with any of the family members? Do you still feel a connection to them?

Absolutely! There was never any thought that we'd lose touch once they left the neighborhood.

First, they still love the Lower East Side — it just got to a point where, because of a combination of overseas competition from non-union producers, plus the failure of NYC to offer them any incentives to stay, they were left with the option of sticking around a few more years and likely going out of business, or finding a way to keep the company going elsewhere.

The fact that they decided to relocate within commuting distance for most of their long-time employees speaks to the ethic of loyalty that drew me to their story in the first place.

Their location on Rivington Street was iconic, that's for sure, but it's the people who have run the business and who work there, and their humanity and ethics that make their story extraordinary, and all of that has traveled with them up to Rockland County, N.Y., where their factory is operating now. I've been to the new factory a few times, and the machinery may be newer, but there are a lot of familiar faces, which is great to see. 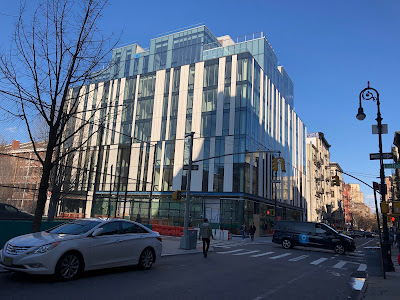 Have you seen the almost-completed condoplex that took the place of Streit's?

To be honest, I've seen pictures of it, and caught glimpses of it from a distance, but I haven't been able to bring myself to actually walk on that block since the factory was demolished. I'm sure at some point I will, but I'm just not there yet.

And honestly, one of the things I fear most about it is something that I've experienced passing by any number of locations where iconic buildings or businesses have disappeared, which isn't a sense of loss — that you can feel from the comfort of home — it's the lack of a feeling of loss, or a feeling of anything for that matter, because what has replaced it bears no resemblance to what was there before.

It's not that you ever forget a place like Streit's — I can conjure up the feeling of walking through that building, the sounds of the old machinery, the smell of fresh matzo baking, anytime I like. It's that standing in the place where it was does nothing to remind you of any of those things because all markers of its existence have been erased.

In some way, maybe it's for the best, at least psychologically, because so many of the places that meant something to me in this neighborhood have disappeared, if I had experience the true weight of their loss every time I passed by their former location, I don't think I'd make it down the street!

But when it comes down to it, honestly I think it's dangerous in an insidious way, because it can lead to forgetting how much we have lost and how much we have to lose if we don't take action to keep these kinds of places around. It's one of the reasons I'm so thankful to have been able to shoot this film when I did — so that it can hopefully act as a reminder, as a sort of counterweight to the numbness of walking past a glass-cladded condoplex.

What's your next project?

Well, even though the film has been released, I believe there's still more of the story to tell, because we had to finish filming before the new factory opened. So, for one thing, I plan to do some additional shooting up there, and find a way of offering people a look at where the Streit's story has gone since the film was completed.

Also, when Streit's left Rivington Street, they brought practically everything from the old factory with them, with the intention of devoting a portion of the new factory to a museum, which would include much of their old machinery from Rivington Street in working order. They've asked me to be a part of helping put that space together, and I'm extremely grateful and excited for that opportunity.

As far as the next film, that I'm still figuring out. I've some ideas, and it's just a matter of feeling them out to see what's going to work — and finding funding, of course! This neighborhood and this city have a lot of important stories to tell, and I hope to have the opportunity to document more of them.

The PBS program includes a one-hour version of the film, plus new interviews conducted by PBS with Streit family members. With a multi-year deal in place, Levine said that it appears the film will become an annual Passover tradition on PBS.

The special airs tonight on WNET at 10:30, and again early Sunday at 2:30 a.m. Find all showtimes at this link.

The DVD includes 25 minutes of bonus features, including footage shot at the Streit’s factory on Rivington Street in the 1940s.

I will always remember the Employees handing out fresh-baked matzohs through the windows of the factory area to young little me on Rivington Street. A loss to the community.

I am probably going to get a lot of shit for this, but I actually like this building. Its modern, fresh, and completely different from other buildings. I would live there. Change every now and then should be embraced.

"...what has replaced it bears no resemblance to what was there before" - oh I don't know, if you squint while you look at the image, it sorta looks, in a nod to what was produced in that now-lost warm red brick building, like a bunch of matzohs that have been glued into something resembling a cube shape by a drunken Hell's Triangle reveler.

@Anon. 10.01 - "Change every now and then"? What is this "every now and then" of which you speak? Massive chunks of our city are being leveled around us and being replaced by bland hideousness on a vast scale and we are supposed to "embrace" it? Yeah, no. But thanks for the suggestion.

Calm down, Gojira. The city doesn't belong to you. It belongs to all of us. I was just trying to be upbeat and positive. Have a great night :)

@4:09pm: Landlines are still very much around, thanks! We who remember what happens when there's a power outage are very happy to have our landlines.

BTW, I have an iphone, but I will ALWAYS have a landline; the clarity of sound on a landline can't be beat!

I appreciate someone trying to be upbeat. It's not the sentiment of feeling a loss for something missed, it's just that it's the same old people saying the same old thing over and over again. Throw a curve-ball once in a while.

@1:43pm: You want a curve-ball once in a while? How about if they put in a 50-story 100% affordable apartments building? THAT would be a nice curve-ball.

PS: "Same old people" are what gives a place stability!