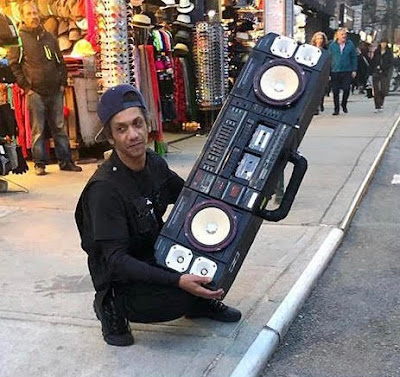 In the evening at Abraço on Seventh Street (Grub Street ... previously)

...EVG reader Jason recently shared this photo of the demolition winding down at the former St. Denis Hotel on 11th Street and Broadway... 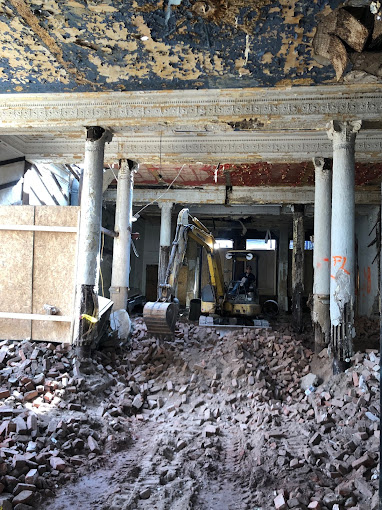 On that topic: Jeremiah Moss writes about the loss of this building here.

About bringing your dog on the subway (Gothamist)

At their Easter worship celebrations on Sunday, the Middle Collegiate Church, 112 Second Ave. between Sixth Street and Seventh Street, will feature selections from “Jesus Christ Superstar” at 9:30 and 11:45 am. (Official site)

Over at the Classic Stage Company on 13th Street, Marc Blitzstein's historic 1937 fervently pro-labor "play in music" "The Cradle Will Rock" continues through May 19 (Official site)

See "2001: A Space Odyssey" in the big auditorium this weekend at the Village East (Official site)

Some history of St. Ann’s Roman Catholic Church on 12th Street, now a monument in front of an NYU dorm (Ephemeral New York)

Cabin Down Below returns to below 7th and A (Grub Street ... previously on EVG)

At Essex Crossing, 180 Broome St. has reached its full height of 26 stories (The Lo-Down)

The story of how this Keith Haring mural was saved from the LES... and now on display in Red Hook (Artsy)

Diversions: When the Psychedelic Furs were "one of the coolest, most underground groups around" (Dangerous Minds ... and I recall that frontman Richard Butler once lived on St. Mark's Place?)

You are one m'f'n bossmang of an aggregator! BEST in the city by far. Really helps those of us on limited Gig plans.
Kudos!
and Thanks!