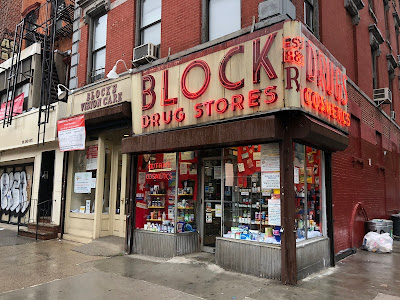 You may have seen the signs in recent weeks at 101 Second Ave. (thanks to Steven for the tip and photos) ... Block's Vision has merged into the Block Drugs space next door at Sixth Street ... 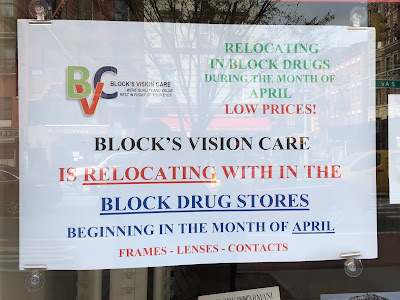 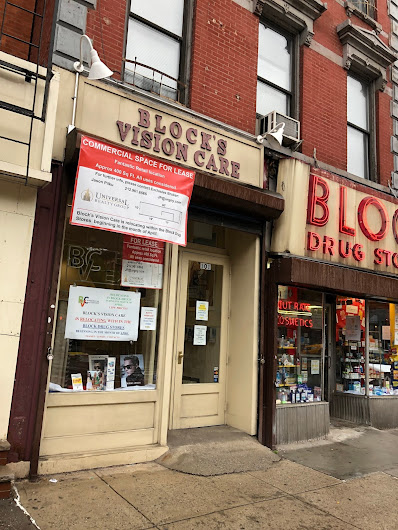 Blocks's Vision opened at No. 101 (previously the home of Jack's Luxury Oyster Bar) in the summer of 2013.

Block Drugs, owned and operated by Carmine and Beth Palermo (a licensed optician), dates to 1885. The business has been in the Palermo family since 1962.

For further reading:
How a 131-year-old pharmacy survives against the Rx giants (New York Business Journal, February 2016)
Posted by Grieve at 4:05 AM

When you walk into Block Drug Store you walk back through time. The family owned business provides a personalized service that is hard to find in a city as big and busy as NY. You can even find an old "weigh yourself" scale right by the door. Family pride makes this store something special. Now if only they would clean their famous neon sign which is filthy and a bit of an eye sore. It could be so much more.

I love BLOCK pharmacy! Hope they'll be around for many years to come.

if you need any reminder about what makes block such a good neighbor - in addition to their careful and old-fashioned customer service - just think back to the blackout caused by sandy when the block folks sat at a table on the sidewalk and filled many prescriptions for people that brought their current Rx bottle, and trusted the customers to come back when power was restored to update the records and make payments.

the block folks set a high standard that everyone would benefit from trying to follow.