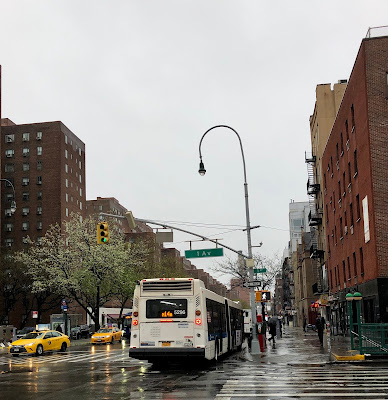 Perhaps we'll have a little more clarity later today — two days before the L-train slowdown starts — on the status moving forward of a) the dedicated busway originally slated for 14th Street and b) the SBS stops for the M14A and M14D.

Vin Barone at amNewYork has this scoop:

The de Blasio administration will ban private through-traffic on 14th Street between Third and Ninth avenues as part of a new pilot street design to help speed up buses during the L train’s Canarsie tunnel reconstruction, according to a draft release of the plans obtained by amNewYork.

But the changes won’t come until June...

City agencies had already taken the first steps to make 14th Street a car-free busway for most of the day. However, with the full L-train shutdown called off by Gov. Cuomo in early January, those plans were put on hold.

In a series of tweets yesterday, one local transit authority made the case for how important buses will be to help people get around in the next 15-18 months...

In addition to serving stations on 14th Street, the M14A will extend to Delancey St-Essex St Station, giving you an easy connection to the F, M, and J trains. (3/6) pic.twitter.com/9wSPGr1fgk


When you think about how the #LProject will impact your travel, other trains might come to mind first--but consider that buses might actually be your best bet to get across town in Manhattan, and to connect you to the G train or our enhanced M train service in Williamsburg. (6/6)


And seizing on this moment...

.@RidersNY reiterates call for @NYCMayor to retain the 14th Street busway in light of this tweet: https://t.co/EXyuPpDEtY pic.twitter.com/AcndUsIqxQ


Meanwhile, it's still a big mystery what the MTA intends to do with the M14A/D. As previously reported, proposals to eliminate a handful of stops on Avenue A and Avenue D to accommodate express service have been met with opposition from residents and local elected officials.

In a Daily News article published yesterday, CB3 District Manager Susan Stetzger "accused the DOT and MTA of a lack of transparency." As of the paper's deadline, neither agency had informed her of a final plan.

As several EVG readers have noted, the MTA has already been installing SBS ticketing machines along the M14A/D routes with a goal of beginning service by June. 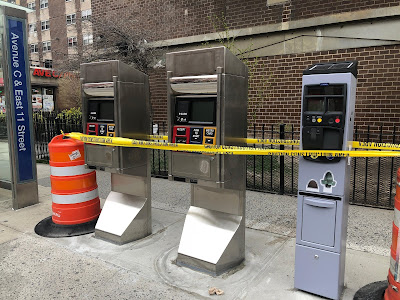 [Photo from April 11 on Avenue C by Shawn Chittle] 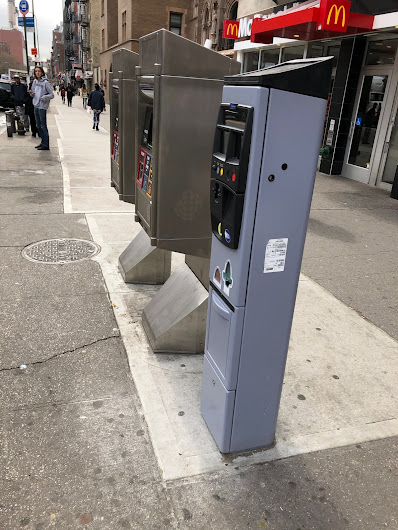 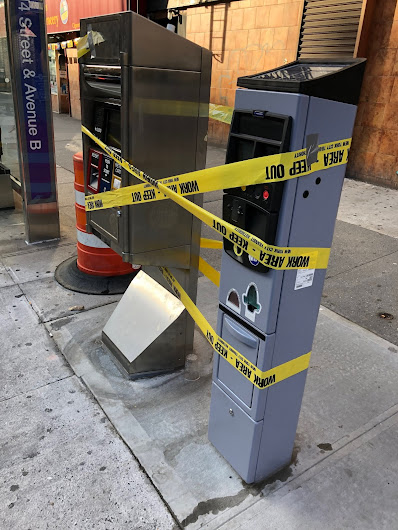 We spoke with several residents who expressed their annoyance that the SBS machines started arriving just two days after the MTA and DOT held a meeting at the 14th Street Y to gather community feedback on the proposed changes to the M14A and M14D bus routes. "I guess they had their minds made up already," said one reader in an email.

For their part, the MTA has this to say about the route:

If you ride an M14 bus, you’ve likely experienced a longer than expected wait at your stop, a longer than expected trip once you’re on your bus, buses that arrive in bunches and off-schedule, or some combination of the three. During the busiest travel times, M14 A/D buses spend about 60% of their trips stopped at bus stops or stopped in traffic. We’ve got a plan to fix this and keep buses moving — we’re partnering with the New York City Department of Transportation to launch Select Bus Service on the M14 A/D.

Select Bus Service (SBS) is a package of improvements designed to target and correct the situations that slow buses down and make service unreliable. Citywide, customers tell us they are more satisfied with their SBS bus than their local or LTD (limited) bus. We’re committed to bringing these improvements to the M14 A/D and the 27,000 customers who use these buses by June 2019.

• MTA Says Buses Are The Best Bet on 14th St. During the L Slowdown — But Busway Remains In Flux (Streetsblog)

• As L Hell Begins, Some Aren’t On Board With the MTA’s Plan For Buses (Bedford + Bowery)
Posted by Grieve at 4:29 AM

as a result of closing 14th starting at third, the first and second avenue intersection are going to be even worse than they are today - which will likely delay those buses that are meant to be sped up as a result of the closure.

This whole thing is so MTA/De Blasio dysfunctional.

What about the idea of bike lanes?

The whole 2nd ticket thing is annoying - like they are going out of their way to hassle patrons - You have to buy 2 tickets - I have a weekly card - but I have to buy a 2nd ticket for the same line - the cops can inspect my metro card for validity as easily as a 2nd ticket, but by forcing everyone to go through the bother of a 2nd ticket, they create a new crime!

You're not grasping one of the major ways the SBS speeds up service -- removing the need to pay on the bus makes loading faster. Now you know.

Don’t worry L train riders, you’ll be safe down there in the crypts, just like they're telling all the women and children of Winterfell on Game of Thrones. And if you see a tall scary white guy walking around down there who looks like he has risen from the dead, don't panic, that’s just your mayor Bill DeBlasio.

Residents: don't forget who forced this (Deblasio) and congestion pricing (Andrew Cuomo), down your throats.

I don't know what overcame me... but for the last few weeks I've taken 6 bus rides. I know... Insane. But what encouraged me after the first trip was how fast the bus sped up 3rd Ave... and how fast boarding went. It was easier than the subway. So somebody is doing something right... hopefully the MTA continues.

@8:29am: Bike lanes? Have you been out of town for the past few months? Because there are now bike lanes on 12th and 13th Streets, specifically created to keep bike riders OFF 14th St.

Super glad they are going to move to an SBS for the M14D. I almost never take it even though it's my best link to Union Square, my parking garage, and so many other things because it is SLOW. It can take over a half hour sometimes just to get from Houston to Union Square. So many people get on and off at every single stop, and all of that time dipping MetroCards during boarding takes FOREVER. And unless its late at night, you are stopping at every. Single. Stop. It's so bad that I've resorted to basically taking Uber and Via everywhere. Once this is in place, I'll actually be pretty likely to start taking public transit again. Used to live by an M15-SBS stop, and it was so nice and efficient. Yeah, it sucks having to get a ticket every time you board, so it'd be nice if they could figure something else out there, especially because in all of the many, many times I rode an SBS, I was only checked once...

No private traffic between 3rd & 9th aves. What happens to the people who have monthly garage parking and the garage owners? Thankfully I garage in the Stuyvesant Town garage on 14th between A and B.

Good for Blas for not bowing to the noisy NIMBYs and car-humpers. Good for the state Dems for finally fucking moving congestion pricing.

Cuomo's probably-idiotic L Train showboating will likely come back to bite us when the shoddy work crumbles and the tunnel springs a leak in 15 or 20 years. But in the near term at least it's good to see our local pols resisting their worst instincts for once and following through on carefully-considered plans for the betterment of most of us and not a moneyed, entitled few.

The 12th/13th Street bike lanes are a much-needed improvement (to the extent that they are not littered with parked cops and UPS trucks and whatnot, but eeh...). There needs to be lanes on 14th Street, too, but for now, protected lanes on side streets makes for a much safer commute.

I don’t understand why they dont just run the M14A buses every other stop. Dont lose any stops and have the buses leap frog stops. It may make riders walk to a further stop but at least all the stops will be there and buses move faster as they have to make only half the stops of the route. It would also prevent overcrowding as not everyone will jump on the first bus that comes along. Riders would adapt pretty quickly i think