What the L: Cuomo calls off full L-train shutdown 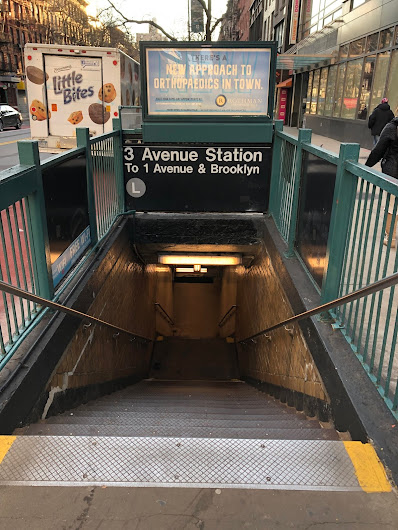 Gov. Cuomo announced today that the 15-month L-train shutdown that was to start in April to repair Sandy-damaged tubes is no longer necessary.

During an early-afternoon press conference, Cuomo, joined by a team of Cuomo-appointed tunnel experts (engineering academics with unknown insights into MTA project management), unveiled a new renovation method using a different design for repairs that would require night and weekend closures of one tube at a time.

Details of the plan have yet to be released.

"It uses many new innovations that are new, frankly, to the rail industry in this country ... With this design, it will not be necessary to close the L train tunnel at all, which would be a phenomenal benefit to the people of New York City," he said.

Cuomo said he does not believe this design has been used in the United States before, though it has been implemented in Europe.

The governor said that commuters should not worry about the integrity of the tunnel: Major structural elements were not compromised. The MTA needs to fix the circuit breaker house and power cables that were damaged after the tubes flooded and were therefore exposed to salt water.

Metropolitan Transportation Authority officials spent years weighing repair options, including shutting down one track at a time to maintain some service between Brooklyn and Manhattan.

In 2016, they opted for a full shutdown, reasoning that it could be completed in half the time and at less expense than a partial shutdown. Initially, they said that a full shutdown would be needed for 18 months, but that timeline was later shortened to 15 months.

Judlau Contracting Inc., which won a $477 million contract to repair the tunnel, was offered incentives to finish the work ahead of schedule and penalties of $400,000 for every day beyond the deadline that the project was delayed.

The L-train prep work started in July 2017 on 14th Street between First Avenue and Avenue B. This past summer, residents learned that this corridor was not only the main construction zone leading up to the L-train closure, but also during the 15 months the MTA expected the trains to be offline between Bedford Avenue and Eight Avenue.

My hot take is that I have no idea if this is a better L-tunnel plan than what was supposed to happen. Obviously needs a lot of dissection. What I do know is that Cuomo took interest in this far later than he should have.

Now riders will be majorly inconvenienced for 3-5 years instead of 15 months of a total shutdown...#Cuomo plan very light on details except that it's a "breakthrough"

Cuomo halting the L train shut down at this point is like when you've finally adjusted to life after being dumped and you feel fine in your new life and then they text you "I've been thinking a lot about you." https://t.co/Thcyvn6Efx

Waiting until the last minute to cancel the L train shutdown -- after three years of anxiety, & a lot of uproot -- just to be hailed the hero, is the single most Cuomo thing possible https://t.co/7YBEFv2QUO

So I guess now the L train will never get fixed? Who does that help?

Instead of shutting down the L train for necessary repairs we're gonna keep it running but it will be on fire. Enjoy!

How much has it already cost New Yorkers to pay for L train shutdown preparations that now won't be needed? There are A LOT of questions that need to be answered.

reading all your L train jokes while on the L, feeling cyberbullied

Nightmare scenario for residents who learn that 14th Street and Avenue A will be the main staging area for the L-train reconstruction
Posted by Grieve at 1:30 PM

Does this mean they will get rid of the bike lanes on 12th and 13th street?

@2:11 haha hahahahahahahahaha haha if only. not to mention the 14th street plans. sure would be nice to restore some resident parking in the neighborhood, since the bike lanes are basically just truck parking, anyway.

I hope it works out for riders but sometimes it seems Cuomo has totally lost his marbles - "mother is the necessity of invention," and that digression about being played in a movie by Michael Imperioli.

I sure hope this does not mean the end to the bike lanes on 12th & 13th. The change in traffic flow has improved the quality of like on my block in these ways. 90% cars horns - there is always room to go around a car or truck blocking traffic, clean streets = probably a combination of trash not getting stuck under car wheels and mostly people (non-residents) emptying there car trash into the gutters (yes I've seen this happen for years). Open visibility = walk out onto the sidewalk and there is space that has not been available sine the invention of cars. Sorry car owners you've gotten free parking for a long time, I never owned a car and never could take advantage of this space now I and others finally can.

Cuomo must really be worried about his "reputation" (such as it is); he knows the shutdown will be a disaster & will be pinned firmly on HIM. And doesn't his posturing about "breakthrough" "thinking outside the box" "brilliance" really suit his massive ego?

OK, now that the L train is NOT going to be shut down, please straighten out the bus stops on 14th Street (where 5th Avenue is no longer a stop). And for heaven's sake, get the damned bike lanes off of 12th and 13th Streets (and also remove the speed bumpers at corners, and those sideshow-worthy "knock-em-over" plastic wands sticking up every few feet).

What a fucking ugly mess they've made (and we don't know how much they've spent on the bike lanes, the bumpers, the paint, the bus stop changes, etc. - but you can bet it's a ton of money)! How much will it cost to un-paint all those lanes, to remove all the SBS "buy-your-receipt-here before you board" machines from sidewalks, etc.? Somebody made a ton of money on this, didn't they?! And now will make money undoing it.

And how much time & energy were wasted holding meetings, "listening tours" and other stuff that was just many citizens' time down the drain? The MTA would be a complete laughing stock if not for the fact that they waste such an incredible amount of time & money.

Now what we NEED is for Cuomo and De Blasio to STOP FUCKING AROUND with pre-existing traffic patterns in NYC, remove bike lanes on 12th and 13th Streets (which we were *assured* were "temporary"- so, are they, or was this just another Trojan Horse bit of bullshit?), remove newly-painted SBS bus lanes and the many other incomprehensible painted lane markings on 14th St, and let people get from point A to point B the way they've been doing until about 2 months ago.

To anon@10:16. Are you stealing the thoughts from my head? Trojan Horse — the perfect analogy.

REBNY might be behind this sudden change of plans.

Avoid the L by any means necessary. Something bad is going to happen.

Heard from people that know that part of the Amazon deal was that the L would be running.. most plausible explanation for his 11th hour visit to the tracks and now this...

Its how fascism works, now they just force everyone to go cashless and it will be complete. Lord Cuomo is a classic Mussolini-type fascist: all corporatist. But you resisters are supposed to love him. He's antitrump, so you have to vote for him.

I don't understand people's reactions above. No shutdown is obviously a good thing. Congrats to Cuomo for leading a change in direction.

Avoid the L by any means necessary. Something bad is going to happen.

I don't doubt that's true, but you know most people need to get to work somehow.