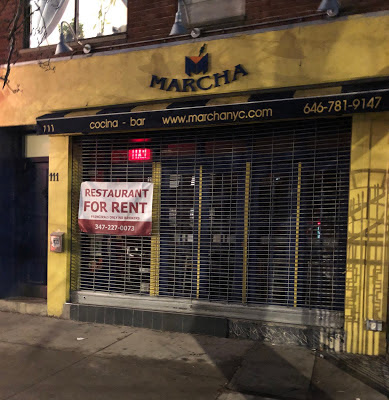 [Photo from February by Dave on 7th]

A familiar name is on the May CB3-SLA docket — San Loco.

Per the just-released meetings agenda for May, San Loco is seeking a new liquor license for 111 Avenue C between Seventh Street and Eighth Street.

The questionnaires aren't posted online just yet, so we'll have to wait to find out more details about what San Loco has in store for this space, which was, until February, the tapas joint Marcha Cocina. (Updated: In an email, co-owner Kimo Hing confirmed that they are applying for a license, though they have yet to sign a lease for the space.)

San Loco had a longtime presence in the East Village, starting in 1986 on Second Avenue before later moving across the street to 124 Second Ave. between Seventh Street and St. Mark's Place. (Updated: Edited that address based on reader comments.) That outpost closed in June 2017 "due to a rent increase that is unsustainable," per co-owner Jill Hing. The Avenue A San Loco closed in 2014 after 15 years in business. 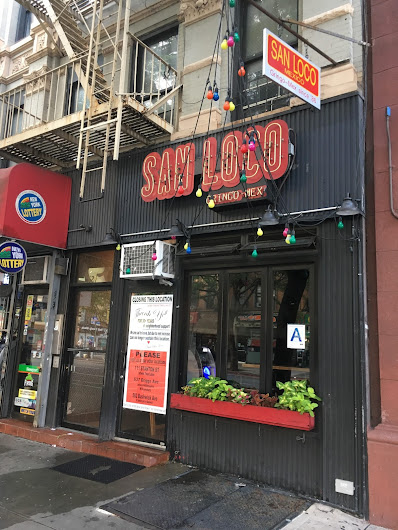 The quick-serve Tex-Mex restaurant recently closed its location on Driggs Avenue in Williamsburg for a variety of factors, including the ongoing construction of luxury properties around its space and the nighttime and weekend closures of the L train, which became a hardship on its staff. Hing had said she was hoping to relocate closer to Bushwick.

The Lower East Side locale on Stanton Street remains open.
Posted by Grieve at 5:00 AM

YES!!! This would be such great news. Good food, friendly staff, nice place for a quick bite. Love it!

This would be awesome!!!

I live on 7th and C. We could use a Mexican restaurant. Fingers crossed.

Actually the first San Loco was on the West side of 2nd Avenue before they move across to 124.

This would be FANTASTIC!

My bandmate worked behind the counter at 2nd ave. back in the 00s. I would hang out sometimes late at night. Fun times. Viva Loco. Not an everyday kind of thing but still good food made by good folks.

I remember San Loco all way back to the 80s when midwestern brothers Craig and Darryl Nelson started the first one. How cool would it be if they landed in this space?

As someone mentioned, the first San Loco was across the street, in what soon became Paul's Palace. And I thought the two brothers who owned it were from Texas. I've lived on the block 40 plus years, and when they first opened, as gently as I could, I suggested they remove their rebel flag, that they naively thought just suggested an authentic Southern experience.

what a great location for San Loco! Ave C needs some low key affordable eateries to go along with the many bars & more upscale spots. Really hope this comes to fruition.