Workers still on the clock at 250 E. Houston St. 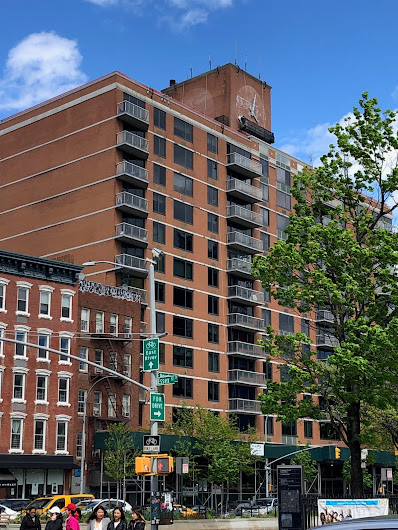 A quick follow-up to the clock post from April 11.

Workers have been refurbishing the (purposefully) askew clock atop 250 E. Houston St., the former Red Square here between Avenue A and Avenue B.

The Dermot Company bought the 13-floor building for $100 million in 2016. Since then, they've revamped the lobby and added new retail tenants.

While the 18-foot statue of Vladimir Lenin, which stood atop Red Square for 22 years was removed in 2016 (before eventually returning not too far away), the clock appears to be in the renovated building's plans.

Renderings of the new-look No. 250 include the clock with the numbers still out of sequence... 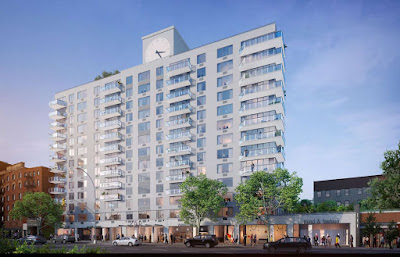 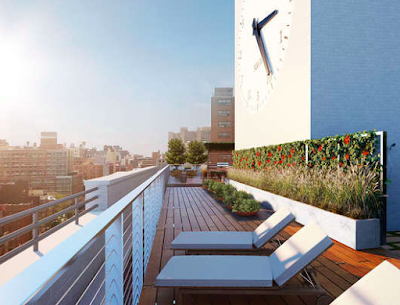 The original Red Square developers, Michael Rosen and Michael Shaoul, reportedly put the clock in this spot to cover the water tower and elevator shaft. The distinctive clock is a take on MoMA’s "Askew" watch that features a random sequence of numbers. (Hungarian graphic designer Tibor Kalman created this version.) 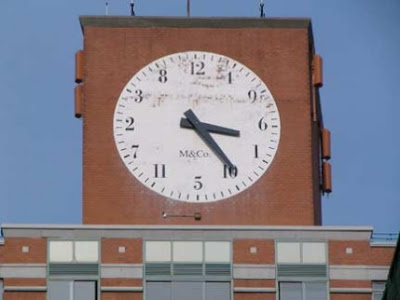 I bet they'll make it a "regular" clock, since the developers have removed every remotely imaginative part of the building (not that the building was all that special, but it at least gave it a try). These people must be unbelievably dull.

Time flies; Tibor Kalman was "radical" in his time (and I went to college with him), but now they're just bland-ifying it all out.

You are so right, Anon. 4:42; Pampers is now running commercials utilizing the old Steppenwolf song "Born to Be Wild", a proto-metal anthem to freedom, biker attitude, revolt, in order to sell - diapers.

Doe anyone else remember the legend on the clock that said, "Waste not a minute"?