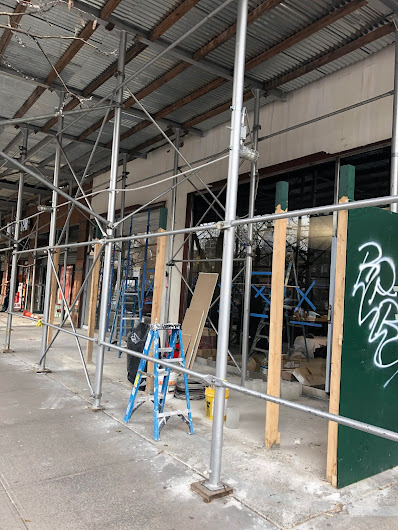 The plywood came down this week along the retail portion of 250 E. Houston St. ... exposing the new Y7 Studio here between Avenue A and Avenue B... 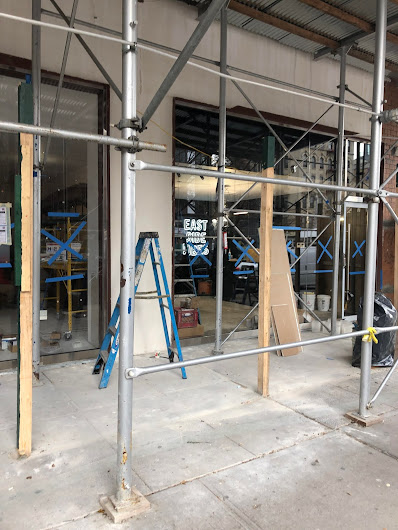 The ground-floor studio, equipped with showers, changing rooms and retail space, opens on Monday morning. This marks the growing yoga chainlet's 11th location in Manhattan and Los Angeles. (Y7 is also reportedly one of the fastest-growing fitness boutiques in the country.)

Here's more about Y7, which describes its practice as "sweat dripping, beat bumping, candlelit yoga" set against a soundtrack of Cardi B, Fetty Wap and Beyoncé.

At Y7 we do things differently. We give you 60 minutes of intensity combined with heat and strength complemented by deep breathing and a calming of the mind. We ask you to step outside the chaos and embrace the fire inside. You’ll flow along to the latest beats. There are no mirrors in the candle-lit studios. The darkness, the sounds, and the heat will take you to a place you’ve never before been. Join us for the best hour of your day. Leave here feeling strong, clear and ready to take on whatever the city has in store for you. Take a class and never look back.

The is the first new retail tenant at No. 250 since the under-renovation 13-floor building changed ownership in the fall of 2016.