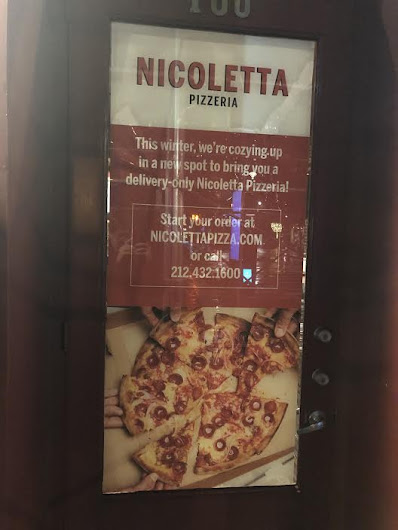 Signage points to a new spot somewhere else in the East Village, where they'll continue on, though only via delivery... and no word just yet where the new Nicoletta will live... 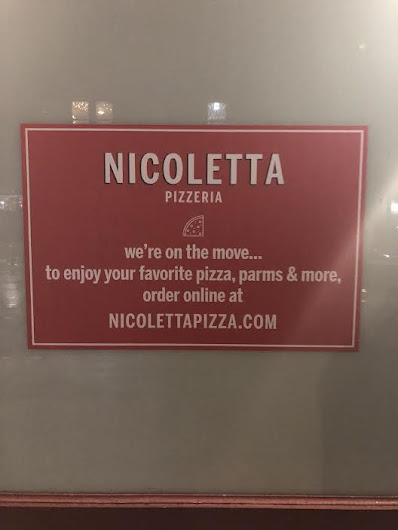 For now, though, Nicoletta fans can still order their pizzas for delivery.

The new EV space will also feature new menu items, per their Instagram, and an expanded delivery zone. (Do you remember when they first started, and their delivery zone was: First Avenue to Third Avenue, and Ninth Street to 11th Street?)

Nicoletta opened to SO Much Hoopla in June 2012, including 90-minute waits for tables.

I don't recall anyone saying that the pizza was all that good. Pete Wells was Real Meh on it in an August 2012 review at the Times in which he bestowed the pizzeria 0 stars.

Nicoletta’s pizzas are not quite deep dish, but they are heading in that direction. The crust is as strong as epoxy, and Mr. White piles it up with an abundance of toppings that would buckle an ordinary pie. In thickness and heft, a Nicoletta pizza resembles the September issue of Vogue.

There was another reason my table never finished an entire pizza: we lost interest. The style of pizza Mr. White is pursuing emphasizes gut-stretching abundance over flavor. The pies are overburdened conglomerations of cheese, flour and fistfuls of other stuff; in the end, the elements cancel one another out.

The salad recipes might have been nabbed from that corner trattoria you stopped going to a few years ago. There is the Nicoletta, with lettuce, red endive and a sliver of focaccia smeared with goat cheese. Or the insalata mare with clams, mussels, squid and octopus, all as tender as an extension cord, all bathed in a dressing that had no effect on any of it.

A look at the EVG archives and our 4568799000223323 posts about the place shows that some readers were tuned off by Nicoletta's T.G.I. Fridaysish interior and corporate vibe and the clipboard-toting host staff standing guard by the door while keeping tabs on those early line waiters.

By August 2013, Eater put Nicoletta on its Deathwatch.

Anyway, Nicoletta has been able to move past all this, enough to relocate to a smaller spot for delivery at least amid more and more competition. How many high-profile pizzerias have opened since Nicoletta arrived? In the last 12 months alone we've had Joe & Pat's, Emmy Squared, Sauce and Sorbillo Pizzeria, to name a few.

Thanks to Steven for the photos!
Posted by Grieve at 6:01 AM

Bring back Cafe Centosette, where they just served up good food without all the artificially created waiti lines and the doorstaff with those cute little clipboards. I had many, many great meals at Cafe Centosette, and then I had one very forgettable meal at Nicorrete and never went back. Their outdoor eating lines didn’t last very long though, the foodie crowd moved on and soon they were resorting to many tricks to get people to come inside; the NFL football banners and early morning beer & soccer promotions killed off any chance of them ever being cool, as did the Deep Dish Pizza Debacle of 2015. Also, what kind of pizza place in this city serves chicken wings? Or a pan backed chocolate chip cooking with ice cream? Many of us had them on the EV Deathwatch early on, and it was obvious they were hanging on well past their expiration date. As Arianna Grande would say, Thank u, next!

Agree with Giovanni 100%. I was a regular at Centosette, but avoided Nicolette like the plague. No surprise that it's shuttering, only that it lasted as long as it did.

I love their pizza, swear to god. I like that style, generous with the cheese, tender crust, not too charred. I had never tried them until about a year ago because I assumed they would be meh. I was wrong. It was a nice, unpretentious place with good pizza and a happy hour and it was easy to get a table. Everyone is so harsh about this spot, I don't get it!

Giovanni, maybe you should have tried them again? I went to Joe and Pat's once and it was terrible, completely terrible, but it was early on and I'm willing to say they may have improved since then.

I really love their Calabrese pizza -- glad they'll still be around for delivery.

Everyone made fun of their claim to “Midwest-style” pizza. I grew up in my grandmother’s pizza parlor in Cleveland (bring on the snarky remarks) and Nicoletta really hits the spot. Will continue to order delivery. Per @Giovanni, so many great meals at Centosette.

I was a regular at Centosette and Shima on Second Ave especially summers outside sidewalk cafe. I go to Numero 28 if I am in the area these days.In Manhattan Eateries come and go with the blink of the eye. Nicolette just never caught my fancy sorry but we will always have John's on 12th Street (I hope).

There pizza is fabulous. Too much grieving on this blog.


Cafe Centrostte was a cozy neighborhood place forced to move from 13th street to 10th street. both blocks benefitted.
Nicolette opened as a star chef's desire to add a new trendy spot to his name without any thought to where he was opening or what would work, assuming his name would carry it off.
their pizza was ok, their attitude was not.
their attempts to lower their snob appeal was evidence of how little they knew about who their customers were.

I love their pizza. I think the dining experience was lacking in terms of atmosphere but the food was great. If i'm ordering online i'll get Nicoletta but if i want to dine in I'll go to Numero 28.

This place never belonged in the east Village in the frst place. It had all the ambiance of a Checkers (which has better and cheaper chicken wings), with the food quality of an Applebees. Why they had to act like a place serving Midwestern pizza was at the same level as a nigthlub or a caviar bar always mystified me. If there’s another big reason people move from the Midwest to New York, it’s to get away from the food. They would probably do much better business if they were located in a mall.

I'm sure it has nothing to do with their prices, for example, the $20 spaghetti and meatballs, which, like an asshole, I occasionally order.

AWWW SHIT I AM REALLY SORRY ABOUT THIS. THEIR $10 ALL-WHITE PIE ON MONDAY WAS TERRIFIC. AND I WAS PLANNING TO GO REAL SOON...

Their pizzas are pretty unique, and they're really good. how much of an EVGrump do you have to be to hate this place?? I'm glad they'll still be doing delivery, their style of pie delivers better than a thin crust pie

Give me a break, this was just a glorified version of Papa John’s pizza at a premium price. We have so many pizza places that are better than this, or I guess you can just drive to Cleveland if you realy want a Midwestern Pizza, whatever that is.

Nicorerette was either hit or miss, either you loved it or you hated it. Most of the reviews on Yelp were positive, but the negative ones like the ones below show why they never were able to grow the business; like Empire Biscuits before them. they just didn’t quite seem to understand the neighborhood.

“If you ever come across the question, "how could there be bad pizza in NY?" - look no further than here. Probably the most boring and bland pizza sauce I've ever had. This "pomodoro" tasted like someone emptied a can of tomato paste and slathered it onto the pizza. Tasteless, zero seasoning (not even salt and pepper; I had to add a little garlic salt and some oregano to make it taste like something). The pizza was made from a well baked focaccia bread I will give them that; but there was so much tomato paste it just wasn't pleasant to bite into.”

“Honestly! When it says salad on the menu you expect a salad. Especially if it's a 10 dollar salad. I ordered the beet "salad" It says it will include ricotta (It did not!). All I got was beets with red oinion for 10 dollars. REALLY!? What am I suppose to do with that!? It should be considered as an appetizer, actually no not even an appetizer. If I wanted beets with red onion I could have gotten it for 2 dollars, at the closest supermarket.”

To say the pizza was substandard is to be very kind. This pizza is not good at all.... the food overall..... very bleeeeeeeh..... it's edible but that's about it.

NY'ers..... we hold our pizza to a sacred level...... A real NY pizza place should never serve chicken wings.... period.

Also Nicoletta serves a pan baked chocolate chip cookie with ice cream on top??? Come on!!..... what is this F'ing Fridays?!?! For god sakes man !!

Take your chicken wings, chocolate chip cookie and lousy freezer section tasting pizza back to the Midwest or whatever Kraft & Hormel Chili eating fly over state you came from.“

We went to Nicoletta's regularly, but only for their Monday night $10 pie and half-price beer special. It was one of the best deals in town. The pizza crust is very chewy, very filling, which I like now and then (they also had a good gluten-free pie). It's like the Doc Martens of pizza. One pie and a salad to share and there would be leftovers.

I never got attitude there, except good attitude. I agree that atmosphere was lacking. It needed more of a pizza vibe, maybe more wood, or booths, or something. You could see they needed more business to survive, and they weren't making much money on us...Did I mention the exceptional vanilla gelato from a soft-serve machine in the back?

A few people have mentioned Numero 28. Expensive, but the buffalo mazzarello pie might be the best pie in America. And that's to go.

place was always empty with only tourists. can't believe it lasted this long. good riddance.

Nicoletta makes a very good, pretty unique pizza. I never understood what was Midwestern about it, and I'm from Milwaukee-Chicago. What has occurred to me, though, is the strong resemblance it bears to a kind of cleaned-up Pizza Hut pie, which I grew up eating far too much of in the '80s (which is shameful because whatever the haters want to say, Greater Chicagoland has a diverse array of world-beating pizza styles). It's good, though. I just don't know how you compete with Sorbillo, Luzzo's, Motorino, Gruppo, Tramonti, Sauce, Gnocco, Artichoke, five billion generic New York slice shops, etc.

P.S. No one would ever mistake me for a tourist. (I didn't know Nicoletta's was so controversial!)