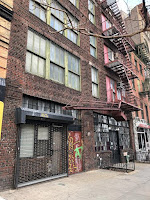 In case you didn't see this feature in the Times over the weekend... Alex Vadukul profiles the artist Sir Shadow, one of the six remaining residents of the Whitehouse, about the last of the flophouses on the Bowery.

As Sir Shadow hums for inspiration, his slender hand strikes a sketchpad with a silver marker and swirls deliriously, never leaving the page, as though he were signing a signature. The elegant silhouette, formed with one continuous line, depicts a saxophone player. He blurs through more: a jazz ensemble featuring trumpet and upright bass; a drummer in the flurry of a solo. His musicians are faceless abstractions.

At 6-foot-4, he sleeps diagonally to fit into his windowless cubicle. Rarely without his fedora, he gets around on a red electric scooter and draws his blues and jazz musicians across the neighborhood. He calls his one-line style Flowetry, which can be found in the calendars he sells.

But his masterpiece might be the Whitehouse Hotel itself. Nearly every hallway and boarding room contains a Sir Shadow mural. Even the keys behind the reception desk are marked with his musical silhouettes.

The piece also delves into Sir Shadow's past as well as "another surreal accent" of his life — his connection to one of the most powerful real-estate families in NYC.

The Whitehouse, a four-story building erected in 1916 at 340 Bowery between Great Jones and Bond, spruced itself up in 2011 to appeal to the thrill-seeking backpacking set. (For $45, guests could stay in a tiny room where the walls don't go up to the ceiling... while the longterm residents remained on another floor.)

However, the Whitehouse stopped accepting reservations in September 2014. Plans were previously filed via Sam Chang in 2014 to "convert 4-story lodging house into a 9-story hotel," according to DOB records. Those plans never materialized. The Renatus Group now owns the property. However, as the Time notes, "development has been hindered by Sir Shadow and his compatriots."

A few residents have died, and buyouts have lured away others. The men who remain in the flophouse have refused these deals. The Whitehouse Hotel’s future appears to now hinge on a grim but simple waiting game.

The Whitehouse Hostel has closed for good on the Bowery
Posted by Grieve at 10:05 AM