When in rehab: Meet Winston, the new red-tailed hawk in Dora's life

On Monday, Goggla posted the first photos of Dora (on the left) cozying up to the new love bird in her life — hello Winston! 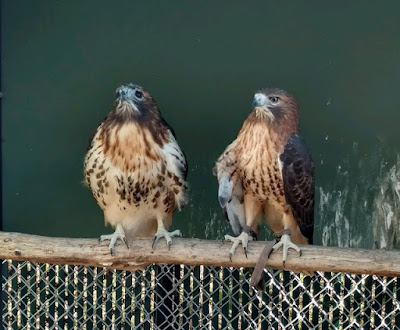 Bobby and Cathy Horvath, the fine folks at the Long Island-based Wildlife in Need of Rescue and Rehabilitation (WINORR), shared this photo with Goggla.

Dora, the red-tailed hawk who previously lived in Tompkins Square Park, has been in the care of WINORR since April. This marked her second stint there for an injured wing.

She is doing well and seems content with her new life at WINORR. However, she won't ever be returning to Tompkins Square Park — or maybe anywhere out in the wild.

It looks like Dora is happy hanging out with Winston, who also has a wing injury that keeps him from being unable to live in the wild. The two have bonded and I'm glad the drama of the last year has had a positive conclusion.

Christo and Dora raised 10 hawklets these past few years before she left for her latest wing rehab. Meanwhile, Christo has been in relationships with Barucha/Nora/Not-Dora and, more permanently, Amelia.

Dora's wing is not broken, but she won't be returning to Tompkins Square Park any time soon

Christo responds to rumors that he rekindled flame with Dora

You won't believe what Christo eats for his cheat meals

Dora doesnt seem so happy. She's got a grouch of a partner (you know what those second and third relationships are like), and looks like she misses the nightlife of the old nabe.

Christo is quite the ladies man :)

Can an animal technically "cheat" on a mate?

E.g. A lion is with another lioness - would his lioness kick his ass? Or would she go after the other lioness Karen Hill from Goodfellas style?

"You keep away from MY HUSBAND! GET YOUR OWN GOD-DAMNED MAN!!!" LOL

I for one am glad Dora is not alone any more; I hope she and Winston can stay paired in perpetuity, and that she is not released without him. And here's hoping Not-Dora found a mate as well.

I hope Dora enjoys the more laid-back life at WINORR. May she & Winston have a nice life there.

Thank you, WINORR, for all you do for these magnificent hawks (and for so many, many other critters too)!

Dammit Grieve - you forgot to add the hyperlink to Dora's outlook on molting. I need some inspiration today.