These photos, by Steven, were taken last week with the Joyface signage was added to the exterior... 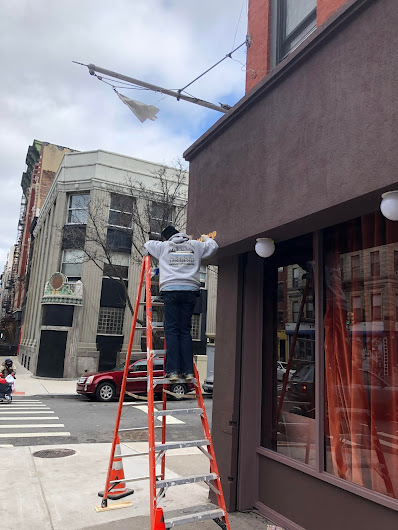 This has been in the works going back to the summer of 2017, when applicants Jennifer Shorr, who used to live in the building at 104 Avenue C, and her partner Brian Powell were OK'd by CB3 to take over the space.

The previous tenant, Alphabet Lounge, was apparently not well-liked by immediate neighbors. During the CB3 SLA committee meeting in August 2017, four longtime residents of either No. 104 or nearby buildings talked about what a horror show Alphabet Lounge was. (They were also there to support Shorr and Powell.)

The bar's 1970s basement rec-room look was also the subject of a feature last week in Architectural Digest...

Previously on EV Grieve:
New ownership taking over the Alphabet Lounge space on 7th and C
Posted by Grieve at 6:56 AM

Will be giving this place a shot! Maybe I'll write a review.

Another drinking hole on Ave C and such demand for it as well. Some places have recently failed others with light traffic and customer attendance hanging on one step before the Marshal's notice. A few Wayland, ABC Beers do well and some established others offering more than alcohol Zum Schneider, Kafka and Eddie and the Wolf come to mind do well also. But its a mostly free country after the Community Board so I guess your free to try.

This place has no respect for the neighborhood! Ever since it opened I’ve been hearing aggressively loud bass coming from this place all night...and I live half a block away!

Unfortunately this sweet spot has become just another over-hyped photo opp with little respect for the very folks that welcomed them in to the neighborhood. The proposed "tavern" with bar food and ambient music never was, the weekend scene is out of control with lines and loud patrons frolicking about awaiting their over-sized Lyfts home, or piling into their party bus to be chauffeured to the next pub...(their complaint: "Joyface closes too early!") Thank God. The music is too loud, and with only one toilet inside...the bodily fluids have been finding their way around the corner, into our recycling bins, between our cars, and onto our doorsteps. What a sweet spot indeed.