Signs of new businesses on 3rd Avenue, and an H Mart update 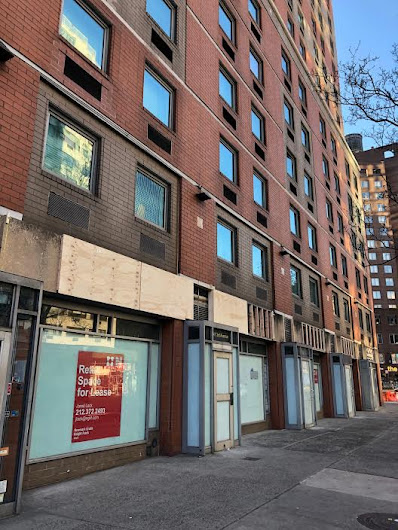 Workers have been refurbishing the space for storefront signage in the long-vacant shops along the base of NYU's Alumni Hall on Third Avenue between Ninth Street and 10th Street... 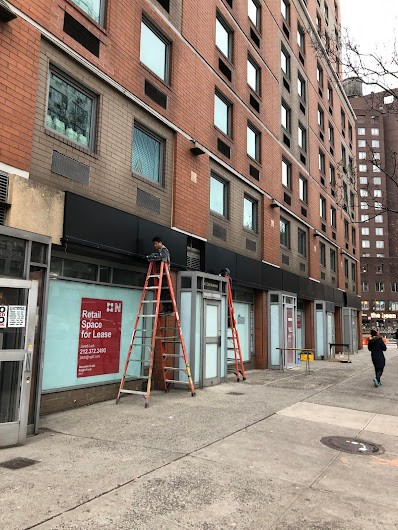 Not sure if this means some new businesses are in the works for this block. There is, however, one new merchant on the way. As we first reported in August, branding for H Mart, an Asian-American supermarket chain based in Lyndhurst, N.J., arrived in the front window of the former Birdbath bakery and Citi Habitats office next door.

H Mart reps said that they do not have a tentative opening date for the East Village at this time. This will be the third H Mart in Manhattan (the others are on West 32nd Street and Broadway on the Upper West Side). Overall H Mart has more than 70 outposts in the United States and Canada.

Previously on EV Grieve:
H Mart coming to 3rd Avenue in base of NYU's Alumni Hall
Posted by Grieve at 4:30 AM

Nothing there lasts anyway.

But I want Hmart now. I am out of chili garlic sauce.

NYU is a very destructive parasite. It takes but does not give.

Forgive me if I'm wrong (I moved away a few years ago) -- isn't this pretty much across the street a M2M? I know the original location changed....but I thought they just moved across the street.

20 Dec/9:18 Anonymous, the M2M moved to 19 Waverly Place, over near Washington Square (not across the street). I just checked online, and even that location has the notation "temporarily closed" on Yelp. There is a Sunrise Mart at 4 Stuyvesant St, but that co-existed with the M2M it was on Third Ave, so they should be able to do the same with H Mart.

20 Dec/4:25 anonymous M2M and Hmart are owned by the same company. Hmart is intact the parent company of M2M. I don’t know if you noticed but when an m2m closes down an Hmart opens down the street. This location was suppose to be a M2M but the company decided that it would be more profitable as an Hmart because it’s internationally known. Same with the Columbia m2m when it moved to 110th ans turned to Hmart. I heard the waverly m2m might turn into a mini Hmart as well because it would be more profitable than if the name stayed M2M