[Updated] Details on the last night at the Continental this Saturday 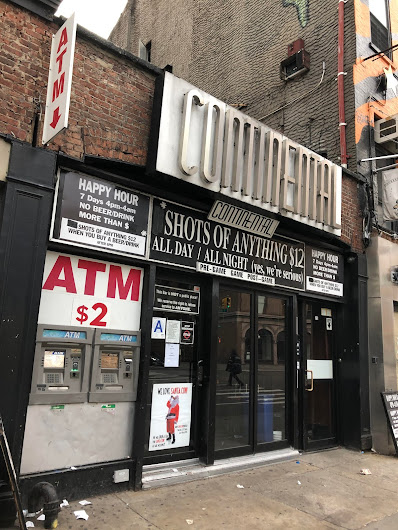 As previously reported, the Continental is wrapping up its 27-year run at 23 Third Avenue at St. Mark's Place on Saturday night.

More details on that last night have emerged via these flyers, showing the New York Dolls outside Gem Spa in 1973, in circulation... 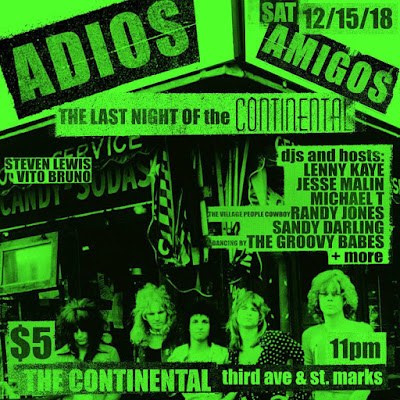 It will be a late night, with festivities set to start at 11 p.m. Guests/DJs including Lenny Kaye, Jessie Malin and Randy Jones (the cowboy from the Village People).

The Continental, which transitioned from a live-music venue to a regular-old bar in 2006, had received several extensions in the past year, first in July then October. Trigger, the bar's owner, had most recently hoped to stay open until May 2019.

This will be the last business to close on the northeast corner of Third Avenue and St. Mark's Place. A boutique office building with ground-floor retail is in the works. Real Estate Equities Corporation picked up the 99-year leasehold for the properties here for nearly $150 million in November 2017. The corner assemblage is owned by the Gabay family.

Apparently Dec. 15 is not actually the Last Night as the Last Night flyers note or what was previously announced... flyers are now up on the front doors noting a Dec. 31 Last Night... with inventory clearance until then... 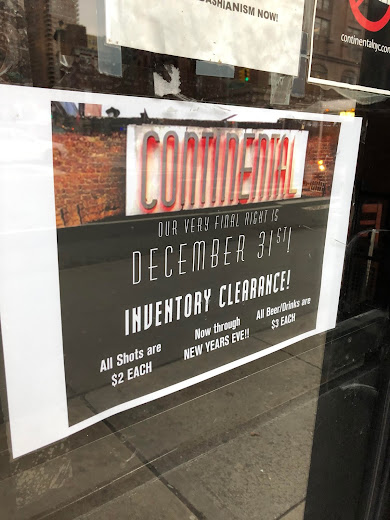 New building plans revealed for 3rd Avenue and St. Mark's Place
Posted by Grieve at 4:10 AM

i will never understand the decision they took to stop doing live music acts the same year that cbgb closed.

i saw some raucously fun shows there back in the day